Ladies and gentlemen, this is the week. Ohio’s biggest rivals stand in the way of the Bobcats improving to 3-0. That’s right, I said it. The Marshall Thundering Herd. Ohio’s biggest football rivalry.

I wrote a little National Blog last year. At one point, I stated how I was over the Miami rivalry, how the ‘Cats need new rivals to make this athletic program more enticing for fans. [Read more here…]

Marshall may be the answer, at least from a football standpoint. 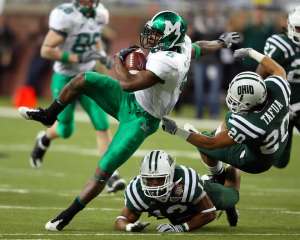 Marshall was a three-point underdog in the 2009 Little Caesar’s Bowl, but pulled out a close victory sparking a six-year deal to be done so that Ohio and Marshall could revive a great rivalry. (Photo by Tom Turrill.)

Seeing how many Herd fans travelled to Athens last fall has me conversely nervous for  how many Bobcat fans will make the trek this Saturday to Huntington. Unfortunately for those not traveling to the Wild and Wonderful state on Saturday, there isn’t a way for you to view what will be an awesome game. Not really helping my push to make this the biggest rivalry for the ‘Cats.

But just look at the last few contests between Ohio and Marshall:

2009 – After years of competing against Marshall in conference play before the Thundering Herd left for Conference USA,  the ‘Cats and Herd met in Detroit for the Little Caesar’s Pizza Bowl. After trailing 21-0, Ohio made a comeback but fell just short of winning their first bowl game in school history, losing 21-17. 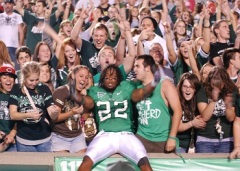 Marshall safety Kevin Perry jumps into the student section to celebrate after the Herd hung on, 24-23 in 2010. (Photo by Nick Piotrowicz)

2010 – Ohio and Marshall begin their first year of a six-year contract and renew the Battle of the Bell rivalry. Boo Jackson hits Terrence McCrae with no time left on a 36-yard heave to put the ‘Cats within an extra point of the tie. Frank Solich decides to go for two, which is unsuccessful, giving Marshall the 24-23 victory. [Full Recap Here…]

2011 – Remember the black unis? Remember the black unis putting up 44 points on a quivering Marshall squad? Remember LaVon Brazill, Noah Keller and Jordan Thompson racing to the north endzone at Peden Stadium wanting to be the first to hoist the bell over their head after a 44-7 route over their foes? I do. That was my most vivid memory of any rivalry I’ve ever seen. [Full Recap Here…]

Now let’s revisit those preps out in Oxford. Granted, last year’s game against the RedHawks was exhilarating, no one was here to see it. It was the Tuesday before Thanksgiving break, and almost the entire student body had left Athens for home. Doesn’t sound like the mark of a rivalry to me. If Ohio State and Michigan played on the same night under the same circumstances, you better believe the venue would be packed.

The rivalry exists less in sports than it does between students of the two schools who just don’t like each other. 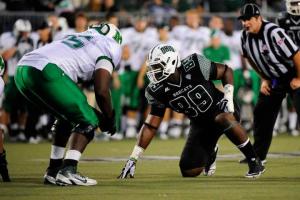 Carl Jones lines up in last year’s meeting with Marshall. He and the ‘Cats D-line will need to put pressure on Rakeem Cato in order to stop the Herd’s dominant pass attack. (Photo by Joe Hawksley)

Regardless, Ohio has now beaten Miami six-straight times on the gridiron. On the other hand, Marshall has won six of the last seven meetings with Ohio.

The only problem with the Ohio-Marshall rivalry is now they can only meet regularly if a contract like the one established in 2010 remains in play. Marshall dipped from the Mid-American Conference in 2005 after dominating the conference for so many years. The Herd won five MAC titles in six seasons under Bob Pruett after moving to the MAC in 1997 making the jump from Division I-AA. When the Big East raided Conference USA in 2005, Marshall saw an opportunity to step into a Cincinnati-less and Louiville-less conference and maybe run the table. Unfortunately for them, they haven’t appeared in a conference championship game since 2002 when they beat Toledo for their last MAC title.

On the other hand, since 2005 and the hiring of Frank Solich, Ohio, has flourished.  In his first home game, he led the ‘Cats to a victory over Pitt and has since taken down two other BCS competitors in Illinois and Penn State. In 2006, Ohio appeared in their first MAC Championship game in a loss to Central Michigan and have returned twice more in 2009 and 2011, still looking to claim the conference championship. Solich even led Ohio to their first bowl win in school history last season with a victory over Utah State in the Famous Idaho Potato Bowl.

Maybe Marshall wishes they had stayed in the MAC? 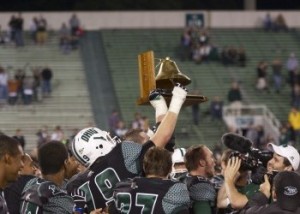 Ohio hoists the bell after taking down Marshall 44-7 in 2011. Where will the bell reside after Saturday? (Photo by Devin Rhodes)

Ohio and Marshall will meet for the 56th time Saturday night with Marshall looking to steal back the bell and keep it in Huntington. They have a good shot to do it, too. Rakeem Cato quarterbacks the No. 1 pass offense in the entire country against a young, beaten up secondary who has had to prove their worth through two weeks of the season. The Herd will still have the lingering bad taste of last season’s beat-down in their throats and will be dead-set on revenge.

So what does Ohio do? They prepare for Marshall the same way they did for Penn State and New Mexico State; execute their game plan and string together a win. It won’t be easy, but it will mean they have taken down their biggest rival and still have a shot at a perfect season.

Embrace this week. For the next few seasons, Ohio-Marshall should be circled on your calendars as Rivalry Week. Start building the ill-will now for what has the potential to be the best rivalry non-BCS football has to offer.

2 thoughts on “Why Not Marshall?”