Following quarterback Tyler Tettleton’s first interception of the season, a pass intended for Ohio Bobcat receiver Bakari Bussey that was stolen away by Buffalo defensive back Najja Johnson, the Bulls managed to drive 93 yards down the field to take a 14-0 lead.On the ensuing kickoff, true freshman running back Daz’mond Patterson was looking to jumpstart his puzzled team. 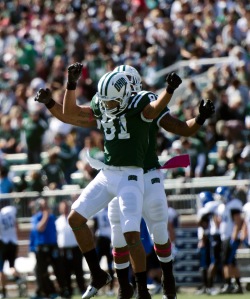 Patterson did that in a hurry, returning the ball the whole length of the field and providing the ‘Cats with their first score of the game, with 3:17 remaining in the first quarter. Ohio followed suit for the remainder of the game, scoring 24 unanswered points and holding off the Bulls for the 38-31 victory.

Although the Bobcats became the first bowl-eligible team, courtesy of a Penn State victory over Northwestern, and improved their record to 6-0 for the first time since 1968, it was a very bittersweet victory. The Bobcats committed an uncharacteristic eight penalties, allowed the Bulls to surpass 500 yards of total offense and likely lost senior tight end and captain Jordan Thompson for the season.

“We knew that going in that they have very powerful, strong running backs, they have a great offensive line, they have a quarterback that they’ll build into the running game, so it’s a very difficult offense to slow down,” head coach Frank Solich said.

Ohio played without their standout defensive leader safety, Gerald Moore, which helps to explain the miscommunications that the defense was having with trying to counter the high-octane Buffalo running game. The duo of quarterback Alex Zordich and running back Devin Campbell, who was filling in for injured Doak Walker Award candidate Branden Oliver, led the charge 75 yards down the field for the first score of the game.

“They were able to do that (run the ball) better to us than we were to them today,” Solich said. “In all my years of coaching I’ve come to understand that if you have a football team that can just run the ball on you, you have problems.”

The running attack didn’t give the fatigued Bobcat defense time to rest, but Patterson’s record-tying 100-yard kickoff return following the second Buffalo touchdown energized the flattened Ohio sideline. The defense, who had let the Bulls convert on all six of their third-down conversions to start the game, came back out and registered their first three-and-out on the following possession.

“It was a pretty big boost for our football team,” Patterson said. “It kind of added a spark for us because we started out kind of slow.”

The ‘Cats found the end zone two more times before heading into the half, while the defense forced two fumbles and recovered another after a Grant Venham punt bounced off an unaware Buffalo special teamer. The first of three fumble recoveries, forced by defensive back Thad Ingol and scooped up by safety Nate Carpenter in the Buffalo red zone, gave running back Beau Blankenship the opportunity to tie the game at 14 with 11:23 to go in the second quarter.

Ohio went into the half outgained in total yardage, outmatched on third-down conversions and with more penalties than their opponent, but a stimulating kickoff return, back-to-back forced fumbles and the unlikely offensive target Bussey kept the Bobcat pulse beating.

“We had a lot of guys step up today and that’s what we needed today,” Bussey said. “We finally have the depth that we need in order to be able to succeed in this program.”

Bussey was filling in for injured wide out Donte Foster, the team’s No. 1 option at receiver. The redshirt senior finished the day with a career-high eight receptions for 77 yards, echoing the next-man-up motto that is often proclaimed by a team dealing with numerous key injuries.

This ideology is evident in Ryan Boykin as well. Boykin, who didn’t play in the last two contests, made his return to the gridiron

Beau Blankenship scampers for a touchdown, his 5th of the season. (Photo by Devin Rhodes)

on Saturday, showing the 20,000-plus onlookers at Peden Stadium that Ohio may have one of the most compelling backfields in the nation. Boykin finished the day with 64 yards on 6 carries, two of which were touchdowns.

After the Bobcats and Bulls shared field goals to start the third period, Buffalo caught the Ohio secondary sleeping on a flea flicker. Buffalo tight end Alex Dennison found wide receiver Alex Neutz wide open for the 55-yard trick-play touchdown. Things once again got interesting for the Bobcat defense, as the game was now tied at 24 and the Bulls had racked up 92 yards on the ground in the third quarter.

The Bobcats took no time to regain the lead once the fourth quarter began. Boykin plowed ahead for the one-yard touchdown run to get things started, then went off for a 51-yard scamper to put Ohio up 38-24 with 5:49 remaining in the contest. Boykin’s two late scores ended up being enough to hold off Buffalo for the remainder of the game.

“Beau’s a different type of runner than I am,” Boykin said about the dual-threat that the Ohio backfield displayed today. “It plays well, we go hand-in-hand together.”

The only thing that was lost by the Bobcats in the fourth quarter was Thompson, who sustained an injury that Solich said would likely sideline him for the rest of the season. Although the loss is a huge one, Ohio has stressed roster depth all season long. Injuries happen, so if the ‘Cats want to continue to accomplish their unfinished business, they have to do it as a unit.

“Right now we got to just weather the storm really,” offensive lineman Eric Herman said. “We’re just going to play Ohio football, just play hard and see where that gets us.”

Ohio will try to reach the 7-0 mark when the Akron Zips pay Athens a visit at 2 p.m. next Saturday.