When the number “6” was put on display in the far left window of the College Book Store, it insinuated the unofficial start of Homecoming week at Ohio University. The subsequent frames spelled out, “A N D Oh Yeah!” reminding the Ohio Bobcat faithful that their team is on the verge of doing something that hasn’t been done since 1968; start the season 7-0 and crack the AP Top 25. 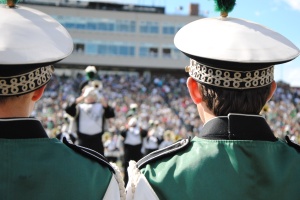 The most exciting band in the land will have something special planned for Homecoming. (Photo by Seth Austin)

A football team off to its strongest start in over 40 years has Athens looking more spirited than ever. Just one stroll down Court Street would have a newcomer believing the town bleeds green. Alumni are lining the streets and Bobcat pride is at an all-time high.

Peden Stadium no longer empties once the Marching 110 leave the field after their halftime performance. Now 20,000-plus fans pile in, sometimes overflowing onto “Victory Hill.”

In the history of the school there might not be a better time to be a Bobcat than now and current football players who grew up close to the program can testify to that.

“(The atmosphere) changed tremendously,” redshirt freshman wide receiver Ian Dixon said. “We really like that the community is coming out to help us out and win games, cheer for us.”

Dixon is the son of Ohio wide receivers coach Dwayne Dixon, who joined the Bobcat staff in 2007 after a two-year stint with the North Carolina State Wolfpack under the same title. Ian spent a lot of time around the program due to his father’s involvement while he attended Athens High School.

Ian was consistently around the team–whether he was supporting his father by watching from the stands or conversing with the Bobcat receiving core when they would come over to the Dixon residence for a team dinner. Getting to know the team first-hand through his dad when he was just a student attending AHS gave Ian the advantage of knowing the Ohio way before he would become a Bobcat himself.

“It’s surreal because I didn’t know about (playing at the collegiate level) when I was in high school, but I knew I was trying to aspire that,” Dixon said of finally being able to put on the hunter green and white. “I was trying to get to that, strive for that and now that I’m doing it, I’m glad I was able to get out here.”

Redshirt freshman punter Grant Venham had similar feelings, as if he was living out a lifelong dream of his, when he became a starter this season. Growing up in Belpre, Ohio, which is 38 miles apart from Athens, Venham was ecstatic to find out that the Bobcats had interest in him in regards to having him join the football team.

“Ohio was one of the last (teams) to actually show interest in me as a punter and whenever I got that information I was really excited,” Venham said. “I definitely pursued coming here just because I’ve always pictured coming here whether I was going to play football or not.”

Venham had family members who attended Ohio University, so being exposed to the Bobcat football family since he was very little allowed him to develop a deep fandom for the team.

Times were tough, however, for the football program when the Vincent Warren High School graduate was growing up. When Brian Knorr took over as head coach of the Bobcats in 2001, the team posted a grim record of 11-35 until he was fired at the conclusion of the 2003 season.

“I mean, I hate to say it, but I didn’t really ever expect us to win whenever I did come (to games),” Venham said. “I was hoping we did, but now fans actually are expecting us to win and just the atmosphere with all these people here is just totally different than when there was half the stands missing.”

When Ian moved with his dad to Athens in 2007, head coach Frank Solich’s third year with the team, the ‘Cats still found it difficult to find their identity in the MAC. After winning MAC East Champion honors in 2006, the first time the team had done so since being named MAC Champions in the magical ‘68 season, Ohio faltered to a 10-14 record the following two seasons.

Dixon described the Peden Stadium stands as spotty and unfilled during those times. Now he speaks of a time where he can point out his friends from high school on “Victory Hill,” cheering with the rest of the amped up and enthusiastic Athens population.

“It’s very important because this is really the only thing we have here,” Dixon said of the recent success of the football program. “This is what Athens is, it’s Ohio University, and to see us do good, it brings the community out.”

Switching vantage point from the stands to the field, especially at a point where the Bobcats are in the process of making history, has been a “crazy” and “unreal” experience for both Dixon and Venham. With the Homecoming game against the Akron Zips drawing closer to kickoff, both Ohio football players are captivated with the realization of being able to play so close to home.

“I’ve always said I wanted to play here since I was little,” Venham said. “Out of all the schools that had interest in me I really saw myself here and comfortable here not just because it’s close, but because it’s kind of the same environment as home.”

Peden Stadium will become a home of its own for more than 25,000 fans on Saturday against the Zips, most likely breaking the previous record that was set earlier this season when the New Mexico State Aggies visited. A small portion of the 25,000 on hand to watch the Bobcats attempt to make history on Homecoming will be from Belpre, including Venham’s parents who have the opportunity to watch him every time the ‘Cats are in town

Whether Venham gets a punt blocked or has the ball go off the side of his foot, he knows that he will always have the support of his family and hometown every time he puts on the hunter green and white for Ohio. Possibly being able to witness the largest and most electric Peden crowd for the second time in one season on a day that embodies the word “home” makes players like Dixon and Venham truly appreciate being able to suit up as an Ohio Bobcat.

“I’m fortunate to have a lot of my family members come support me,” Venham said. “The way it worked out is just amazing and I only have God to thank for that.”

3 thoughts on “A historic Homecoming special for area players”