Mid-American Conference powers flexed their muscles in week six. Toledo, Northern Illinois, Ohio, and Kent State all defeated conference opponents to remain undefeated in MAC play. If this trend continues, expect some great ESPN weeknight showdowns in the coming weeks. I know Hootie is excited. Hopefully the Blowfish are on board too.

Player of the Week: NIU QB Jordan Lynch. Inside the pocket, Lynch had a very average day. But it was his legs that led the Huskies to victory over Ball State, not his arm. Lynch rushed for more yards than he threw and accounted for three touchdowns in Northern Illinois’ 35-23 victory in Muncie on Saturday. Lynch’s 207 rushing yards gives him 789 on the season, over 250 more yards than his predecessor Chandler Harnish ran for over his entire career. The difference between the two quarterbacks is night and day, but Northern Illinois (5-1, 2-0 MAC) has not skipped a beat.

Goat of the Week: Ball State QB Keith Wenning. It may seem strange that this week’s goat threw for twice as many yards in a head to head matchup with this week’s MVP. But dig a little deeper and the truth comes out. Wenning had two crucial turnovers (both on Northern Illinois’ side of the field) in a game that was closer than the score indicated. His second pick came with the Cardinals leading 23-14  in the third quarter. Nearing the Huskie red zone, Wenning overthrew receiver Jamill Smith, which resulted in this circus interception by Michael Santacaterina. Seconds later Northern Illinois would score the first of three unanswered touchdowns. All it takes is one play. Wenning couldn’t get it done.

Surprise of the Week: Western Michigan QB Tyler Van Tubbergen. A week after his three-interception 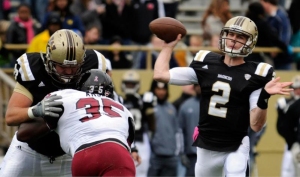 performance garnered him week five’s “Goat,” Van Tubbergen righted the ship. The junior backup tossed five touchdowns and avoided turnovers, all while completing 82 percent of his passes. Sure, his performance came against a winless UMass squad, but Van Tubbergen finally sparked some life into a dying Western Michigan offense. With Alex Carder out indefinitely, it is encouraging to know Van Tubbergen has developed some rapport with his receivers.

Disappointment of the Week: Akron’s second-half defense. The Zips had an excellent chance to steal a game on Saturday in Bowling Green. Leading 10-0 at halftime, Akron simply had to keep struggling Falcon’s quarterback Matt Schilz in check in order to win their first conference game since 2010. Instead, Schilz orchestrated an 80-yard drive to open the half and added two touchdown passes down the stretch. While this young Akron team is learning what winning football is all about, coach Terry Bowden needs to instill a killer fourth quarter instinct upon his Zips.

Replacement of the Week: Buffalo RB Devin Campbell. It’s not easy to replace an impact player like junior running back Branden Oliver. Campbell made it look simple. The freshman gashed through a banged up Ohio defense for 160 yards and a touchdown. He was the Bulls most effective offensive weapon and nearly led them to an upset over the MAC East favorites. When Oliver returns, the Bulls will have a potent 1-2 rushing attack. As for next season, Buffalo is in good hands.

What to Watch, Week 7: Central Michigan takes on Navy in a game that will have a high school feel to it on Friday night… Kent State travels to West Point to take on another military school in Army… It may be homecoming in Athens, but Ohio’s game against Akron may not be a blowout as alumni expect. Akron’s revitalized passing attack could be problematic for an injury depleted Ohio secondary. The Bobcats are officially on upset alert…Western Michigan and Ball State face off in Muncie, both looking to keep pace with Northern Illinois… Speaking of the Huskies, they get a home game against Buffalo… Miami is undefeated against MAC bottom-feeders. They should get a better contest in Bowling Green.