Well, lovelies, it’s about that time again – time to dress up, put on a little music as you walk seductively into your Significant Other’s bedroom…

And then walk out and show the entire campus that you have poor taste.

Some of you (mom) may remember that I talked about couple’s costumes last year. It is my belief, however, that couple’s costume disasters are created anew each year, and therefore, should be ridiculed by a snarky, but devilishly handsome Internet blogger.

So, without further ado…

I was surprised by the sheer amount of Geisha costumes, and was more surprised when I found out the history behind the word “Geisha.” Despite the intended image of a dancer and entertainer (“geisha” more or less translates to “artist”), the word geisha has been (and still is, to some extent) associated with prostitution, especially in the 1600s, when walled-in pleasure quarters were built. During WWII, in fact, many of the prostitutes which serviced the Western soldiers were referred to as “geisha girls.”

Plus, look at the costumes. 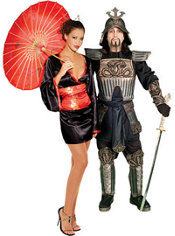 Oh look, it’s the Samurai of Hockey! Photo by PartyCity. 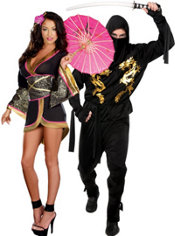 Ooh, it’s the Ninja of Safety Dance! Photo by PartyCity. 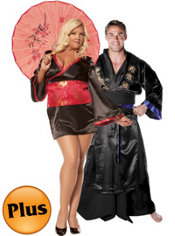 Oh my, it’s the Samurai of the Sock with Sandals! Photo by PartyCity. 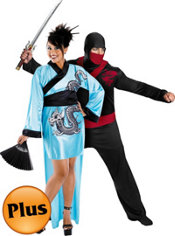 And finally, we have the Ninja of Mayonnaise Sandwiches. Photo by PartyCity.

If they were any whiter, marshmallow fluff would become green with envy.

2.  Plug and socket/USB stick and port

I suppose it wouldn’t be Halloween without a blatant reference to sexual intercourse.

Good thing she’s not from England… he’d have to find an adaptor. Photo by Amazon.

You must notice, though, that you are not only walking around being universally referred to as THAT couple, but you paid up to 45 dollars to be recognized as the high-schooler who snuck into the college party.

If you would notice, neither person in this picture is actually having a good time.

Collectively, their expressions read, “We never get invited to parties, because we are just too fun-loving and ca-RAZY ;D” It baffles even I how their expression could convey a text-based emoticon, but there it is.

Notice also that their hands are almost, but not quite, touching, and the man is floating slightly above the ground.

The only conclusion I can come up with is that the man was killed in a tragic accident while power-walking across the street on Halloween, and so his wife is now wearing the matching costume in his memory.

I only have one problem with this costume. In the story, they’re RELATED. And CHILDREN.

So. Paul Bunyan. Let’s look at the history, shall we?

Paul Bunyan is a giant woodsman. That is, literally giant.

His most famous companion is, of course, Babe, the Blue Ox. The story reads that one year, there was an especially cold winter. So cold in fact, that “all the geese flew backward and all the fish moved south and even the snow turned blue.” While our giant friendly woodsman was out walking in the woods, he heard a sound “between a bleat and a snort.” When he looked down, he found an ox calf, stained blue by the snow, jumping around because it was too small to see over the drifts. So, of course Paul rescued the “little blue mite,” and living with Paul, Babe grew to huge proportions as well – 42 ax handles could fit between his eyes (with a 3-foot ax handle, that means that Babe’s forehead was 126 feet wide – taller than a 12-story building). The best part, though, is Babe had a giant yellow girlfriend named Bessie.

So, this costume is a great choice, if you want to imply that you, as a huge lumberjack, are having intimate relations with an equally giant blue bull.

At least you know that she’s like an animal in the sack.