When Ohio Bobcats head football coach Frank Solich came to Athens in 2005, he envisioned a senior class such as the one that will be playing its last game at Peden Stadium on Wednesday. The 19 seniors that will be honored in the matchup against the Bowling Green Falcons are the winningest class in the history of the program. 35-15 and a forthcoming fourth bowl appearance is the legacy that the 2012 senior class as of right now, but they have a chance to add to their imprint in the history of Bobcat football. 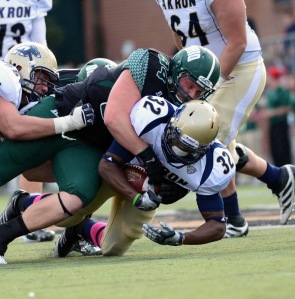 Corey Hastings will be full of emotion Wednesday night. {Photo by Devin Rhodes)

This Bobcat class has also had to fight the most diversity of any class in Ohio football history. Injuries to senior captains cornerback Travis Carrie and tight end Jordan Thompson really took a lot of voice out of the offense and defense, but their presence off the field have not gone unheard. The leadership skills that the two aforementioned seniors have displayed since they arrived in Athens have rubbed off on their teammates. The efforts have been continuous throughout from the 2012 graduating class, helping the ‘Cats to the program’s first-ever bowl victory last season.

“They’ve done everything that can to help us take steps forward, so it’s a group that got the big picture,” Solich said of the senior class. “They understood what we wanted to accomplish with our program, and they set about doing it from day one when they stepped on campus.”

So to think that they would let Bowling Green come into Peden Stadium and snap the seven-game home winning streak that they have helped build throughout their careers would be a faulty conclusion. The Bobcats have had to build up their reputation from the minute they stepped on campus and  are a big reason why the ‘Cats seem to always play in front of capacities crowds.

“Coming here in ’08 as a redshirt freshman, there were fans scattered around, there weren’t too many,” redshirt kicker Matt Weller said. “Over the years and leading up to this year the fan base has really grown and people have become more loyal and have shown more passion for this team.”

Weller will leave an even greater legacy than most seniors due to his individual accolades that may be forever sketched into the Bobcat history books. Weller set 11 school records in his junior campaign and was able to become the top scorer in Ohio football history against New Mexico State in the second game of the season. He is now on his way into MAC history, recently passing Northern Illinois kicker Steve Azar for second on the all-time scoring list.

The Twinsburg, Ohio native has been able to use gain strength from the passion of the Bobcat fan base to propel many game-changing kicks throughout his career. A senior who is fueled by passion and tribulations faced in life is defensive lineman Corey Hasting. The redshirt senior found his way onto the scout team defense in 2008 and became an almost fulltime player in 2011. From walk-on athlete to standout senior, Hasting has never shied from taking the path less traveled when striving to complete his goals.

Hasting’s brother Scotty will be in attendance for the first time in three and a half years, and will get to see his younger brother get significant playing time in his last game at Peden Stadium. As reported earlier, Scotty was a solider fighting in Afghanistan and in 2011 was hit 14 times by an automatic weapon. He didn’t know if his brother was going to make it at that moment in time, but he does now that Scotty will be there watching a walk-on success make his final start as a collegiate football player.

“With my whole family situation and stuff, everything that’s happened, this has been my family pretty much,” Hasting said. “Those are my brothers, so it’s great for us to have the success we’ve had. We hope to continue the tradition even after we’re gone.”

The starting defensive lineman will be running purely off of emotion on Wednesday, and even admits to being anxious to play well in front of his family. Hopefully when he walks out prior to the game next to his brother, he will be inspired to put on his best performance yet. Hasting knows, though, that the season doesn’t finish when his final home game is decided. There is still the unfinished business of bringing home a MAC Championship.

“We’re setting the bar high,” offensive lineman Eric Herman said. “That’s something I wanted to do and these underclassmen are going to have to pick up the torch and try to beat us out and our records.”

Herman has been the anchor of the Bobcat offense this season, helping the offensive line to allow a stingy 11.0 sacks on the season. Redshirt junior quarterback Tyler Tettleton has also only been picked off twice while running backs Beau Blankenship and Ryan Boykin have combined for 1513 yards on the ground. Seniors Vince Carlotta and Skyler Allen will also be playing their last game in front an enthusiastic fan base at Ohio University.

“When I first came here the fan-player companionship wasn’t as strong,” Herman said. “We didn’t really have a lot of people come here and it was kind of upsetting at first, but that was also a motivational tool.”

Senior linebacker Alphonso Lewis looks forward to running out of the tunnel onto Peden Stadium and seeing the excited fans that have been looking forward to watching the Bobcats play football. As soon as Lewis stepped foot on the campus he knew that this program was on the rise and that the fans would soon provide a spark at home for the Bobcat football team.

“They come out here to the game and just be loud the whole game, keep us going, keep us motivated,” Lewis said. “Every time a big play happens you can feel the crowd on your back. Like they say, best fans in the MAC.”

The seniors have not yet accepted the reality that they will be running out of the tunnel for the last time on Wednesday night, but they do know the task at hand; get the 20th home win of their careers and keep the momentum rolling for their final games against Ball State and Kent State. Once they step on the field there will be little time for them to soak in the emotions that will surely be running high for Bobcat seniors. Weller, a player who had his only Division I collegiate offer come from Ohio, will have a tough time capturing his final moment at Peden.

“Looking at the lights and all the fans, it might be hard to hold back some tears,” Weller said. “It hasn’t sunk in yet that it’s only going to be happening one more time.”

Once the ball is kicked off, however, it will be unfinished business as always for this Ohio football team. Players, most who have spent the last five years with the program, will have to use their mixed emotions to run the rival Falcons out of town for one last time. The lessons that have been learned on the field, whether through defeat or victory, will follow them along with the memories that they have created with their four or five years as an Ohio Bobcat.

“It’s had its awesome highs and tremendous lows at times, and that’s part of life,” Herman said. “I feel like this program and what I’ve gone through is really preparing me onward for the rest of my life.”