Ivo Baltic glides up the floor and slams home a missed layup, sparking an affectionate “Ivo Baltic” chant from the O Zone, Ohio’s boisterous student section. Moments earlier, he had knocked down his patented jumper from the wing to ignite an 8-0 run, giving Ohio a 15-point lead over Kent State.

Unfortunately, the good feelings fade quickly as Baltic turns it over on Ohio’s next possession and immediately is sent to the bench.

This sequence from the Bobcats’ overtime win is one quite familiar to Ohio basketball followers. Fans, media members and coaches have been asking this question for nearly a season and a half: Why can’t Ivo Baltic find consistency?

Jim Christian looks on as Ivo Baltic looks to score against Bryson Pope of Kent State. (Photo by Mark Clavin)

“It’s real hard to figure out,” said Ohio coach Jim Christian before a practice last week. “Basketball is 90 percent mental; it’s a mental game. Some guys can handle the ups and downs better than others.”

These words are a far cry from what one would expect to hear about a player whose career is littered with both individual and team accomplishments.

While talking with current and former coaches who worked with Baltic, phrases like “tremendous athlete,” “offensively gifted,” “can score from all three levels,” and “difficult to guard” are common in describing the senior forward’s game.

As the Bobcats have racked up wins and national recognition, the Bosnian native has struggled to find his niche on a team overflowing with talent.

To put Baltic’s inconsistent production into perspective, he averaged 15.8 points and 6.7 rebounds over the final 13 games of his sophomore season, shooting 56.2 percent from the field while converting 52 of 65 at the foul line (80 percent). He scored 16 or more seven times during the stretch, reaching double digits in all but two games.

He finished the season averaging 11.4 points and 6.1 rebounds, shooting 53.5 percent from the floor, good for second in the MAC. It looked like Baltic was ready to explode and dominate the conference for years to come with his rare combination of size, athleticism, vision and quickness.

Yet Baltic’s highly anticipated junior year began just as his sophomore season did—slow and inconsistent. He averaged a tick over eight points in the first nine games before finding his rhythm in blowout wins over Wright State (15 points in 19 minutes) and Northern Iowa (season-high 22 points on 10-of-14 shooting), setting off a streak in which he scored in double figures for 10 straight games, ending with a 20-point performance on “Gary Trent Day” in a thrilling comeback win over rival Miami. Baltic was playing like everyone knew he could, attacking the rim and scoring from inside and out.

However, after the Miami game, his performance sharply declined, falling into a rut that has plagued him ever since. He shockingly never scored more than 10 points for the rest of the season (18 games) even as the Bobcats made school history with a program record 29 wins and trip to the Sweet 16 for the first time since 1964.

It was midway through this rough patch that Baltic began a mystifying streak of 622 minutes, spanning 20 games (including the first 11 of this season), without attempting a free throw.

According to sports-reference.com, of the 1,245 players with at least 200 points this season, only three (all of whom are guards) have attempted less free throws than Baltic’s 13.

“Sophomore year when I was in the post a lot, I was way more physical, so I would get to the line more,” Baltic said. “When you spend so much more time out on the perimeter shooting jump shots, the chances of you getting fouled are slim.”

Baltic’s lack of free throw attempts renders him inefficient offensively because he must take a high volume of shots in order to score his points. He also doesn’t shoot many threes (8-22), instead opting to take long two-pointers, many of which are just a foot inside the arc, a shot that most coaches agree is the worst in basketball.

Baltic’s Player Efficiency Rating (PER), a popular advanced statistic developed by John Hollinger which attempts to quantify player performance on a per-minute basis, was a very respectable 20.1 (15 is average) during his sophomore season, good for 10th in the MAC. But his PER sunk all the way to 12.9 last season (64th in the conference) and sits at just 14.6 this season.

“When you limit yourself to being a jump shooter, then you give yourself the opportunity to have some off nights because sometimes those shots aren’t going to fall,” said Aaron Fuss, who was promoted to assistant coach this season after spending three years as Director of Basketball Operations for the Bobcats.

Finally, after back-to-back scoreless games against Kent State and Akron, Baltic was replaced in the starting lineup

“I don’t really care who starts, but I think it’s important to reward guys when they’re playing well,” said Christian of the lineup switch.

The coaches have done everything in their power to try to get Baltic to play with confidence and aggression, but it has not registered yet.

At this point, he is an unsolvable puzzle, an enigma. On the surface, his numbers aren’t far off from his sophomore season. He’s scoring 8.1 points per game, leads the team with 5.3 rebounds, and is second in assists. But for a guy who received ringing endorsements on his ability from former assistant coach Dustin Ford, Christian and Fuss, the numbers are hollow, a reflection of his inability to find consistency.

No one is questioning Baltic’s physical talent.

“He’s a matchup problem,” said Ford, who coached Baltic during his first three seasons, before leaving for Illinois with former Ohio head coach John Groce. “He’s capable of posting, he’s capable of catching and shooting and he’s capable of driving. I don’t think there’s anything in his offensive package that he can’t do. There’s no doubt he’s capable of doing whatever he wants offensively, when he wants to do it.”

How can a guy with so much offensive talent struggle so mightily? What’s the issue? What is holding Baltic back from producing like he did at the end of his sophomore season and for stretches last year?

The soft-spoken Baltic admitted the inconsistency is mental.

Christian believes Baltic’s issues are beyond his control at this point. 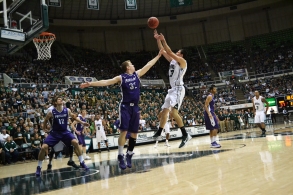 Ivo Baltic pulls up against Portland. (Photo by Mark Clavin)

Amid the high-flying dunks and sweet-stroking jump shot, Baltic said he’s played tentative at times, pressing to make plays. In the Bobcats’ home game against the Golden Flashes, Baltic twice drove baseline, jumped in the air under the basket and floated passes toward the perimeter without even looking at the rim. One of the passes was easily intercepted, prompting Christian to spread his arms out wide with a confused expression on his face.

“It’s not by design,” said Christian of Baltic’s tendency to kick the ball out on his drives.

“I was just telling Coach, I’ve been playing a little too fast for my liking,” said Baltic. “When I’m out there, sometimes I feel like stuff is moving a little faster than it has been lately, and it’s me being a little tentative. I need to start being more aggressive and start scoring more.”

The coaches have made a concerted effort to stress to Baltic that even when he isn’t scoring in the half-court, he can score in other ways.

“He’s got to be opportunistic. That’s why we need him to run the floor…that’s when he gets layups and dunks,” added Christian.

Arguably the biggest difference in Baltic’s game as a sophomore to now is that he’s played mostly on the perimeter in the half-court offense, as opposed to sitting on the block. The change is a combination of things, most notably scheme and personnel.

Although Christian did not change much when he took the reigns from Groce, he did implement a “four out, one in” system that calls for senior forward Reggie Keely to play inside with four shooters surrounding him.

“You can’t have two post players right near each other,” said Christian. “Reggie does a lot of that stuff for us. He’s usually down there.”

That has forced Baltic to float around on the perimeter, and although he has greatly improved his outside shooting and ball handling, he is clearly more comfortable on the block.

However, even when Baltic has had the opportunity to play with his back to the basket, he hasn’t impressed, looking like a shell of the player who once put up 31 against Northern Illinois. He attributed his struggles in the post to a lack of practice.

“I’ve gotten away from it. You can’t just go out in a game and do stuff right away. You have to work on it out here (at practice). That’s partially on me. That’s something I have to work on.”

It’s astounding that a weapon Baltic used so frequently with such great success in 2010-2011 and for parts of last season has all but disappeared from his repertoire.

“At the end of last season, he kind of morphed into and was successful at making jump shots,” said Fuss. “He’s been a stretch the floor guy.”

But no matter whether he is stretching the floor or battling inside, his coach just wants the enigmatic Baltic to make the right decisions.

Since being relegated to the bench, Baltic has finally found some consistency, scoring eight, eight, eight, six and eight points while grabbing 5.4 rebounds. And even though his role has changed and his production has dipped, Baltic remains an integral player for the Bobcats and still has the skills to take over a game.

With the ‘do-or-die’ games of March looming, it’s often those big games that hinge on the performances of role players, which is what Baltic has become. Bobcat Nation hopes Baltic can regain his confidence and produce at a level one would expect of a player with his immense talent.

“We need him,” said Christian.

Otherwise, Ohio will have a difficult time making another deep run in March.