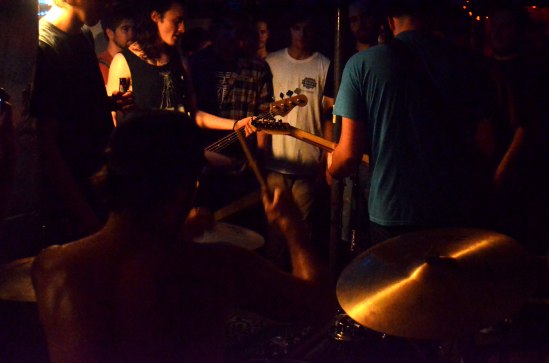 Editor’s note: this is the first post in a series of articles for Speakeasy titled “Athens Steez.” Through the course of this series’ run, Speakeasy plans to cover the ongoing house show scene in and around campus along with commentary on the music. Rick Bannan is a reporter for Speakeasy Magazine as well as the bassist and vocalist for local punk band Tidal Tales.

Here’s his definition of the series name: “‘Steez,’ is a portmanteau of ‘Style’ and ‘Ease’ that has been adapted as a phrase used similarly to ‘Swag,’ but is much less beaten to death by contemporary media.”

Athens’ house show scene kicked off the season in earnest with shows this past weekend on both Friday and Saturday.

The house show phenomenon is a collaboration between homeowners, musicians and show-goers in an effort to offer venues for just about any band that forms in or travels through Athens. Unlike the University-sponsored gigs at Templeton-Blackburn Memorial Auditorium and the Convocation Center, and the shows at local bars like Casa Nueva Cantina, the house shows allow bands that might not be able to break into the business of playing music professionally a chance to do what they love for an open-minded audience.

While the house show scene has no doubt existed in some form since people started playing music in Athens, the recent revival of the scene occurred in the summer of 2012 with venues like The Lodge and Castle Genesee having their first gigs in their living room and basement, respectively. Another venue, The Pink Mistress, started not too long after.

If you’re wondering why the addresses are not published, show-runner and regular performer in the scene Grant Engstrom has an answer.

“We want people who care about music to be at these shows,” Engstrom said. “If you are merely coming to chug a couple of beers with your friends and not get involved with a great scene, we don’t want you there.” 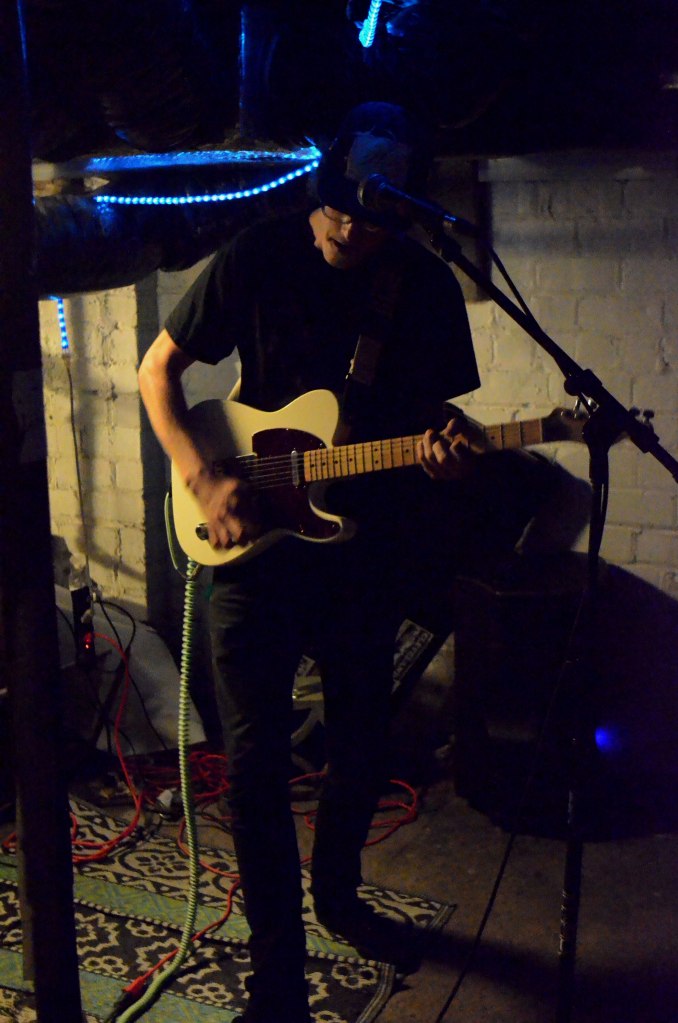 The statement may seem a bit harsh to those interested into joining the scene, but the sentiment speaks to a very real symptom of Athens’ party town reputation. Since the crackdown on nuisance parties that has occurred in the last few years, both raucous ragers and more artistically legitimate house shows are all subject to the same police and landowner surveillance and intervention. Apart from that, there are also the people who go out on a weekend with their only thought being about how drunk they can get before getting arrested.

That was the main reason Engstrom, the guitarist for the local act Small Steps, keeps the exact locations off the internet. However, this doesn’t mean that it’s hard to figure out where the venues are.

“If someone doesn’t know where a show is they can ask one of us, or they might have a friend who knows,” Engstrom said.

It’s the feelings of community that run the fastest for those who take it upon themselves to turn their homes into stages. That’s why those involved shy away from treating their events as just another party. In the age of houses having their own twitter accounts to advertise their parties, some Athens show runners wish to have their presence remain off the internet.

Guitarist Sam Stansfield of Method Air, who along with Small Steps and other Athens local act Mom’s Weekend played Saturday at Castle Genesee, spoke of the highlights to both performing and attending the shows.

“It’s an inclusive scene,” Stansfield said after his two-piece act played. “If you come here, you won’t be judged.”

Compared to the frat parties and Mill Street keggers, or the fests where partiers flash numbered signs to rate girls as they walk down the sidewalk, not being judged sounds like a pretty enticing reason to get involved with the scene.

Saturday’s show was a return to the performing season for The Castle, as it was the place’s first lineup since Ohio University’s classes started Aug. 26. The show featured Columbus act History’s History alongside the three previously mentioned local groups.

“Every show is just like a treat,” he said. “It was special just to see so many people here.”

The show itself began with Small Steps going through material reminiscent of early 90’s Cupertino, Calif. act Mohinder. This would be a departure from their original “Whoops.” EP, a change which demonstrates an evolution of music taken by a lot of acts from the time period of Mohinder and similar groups.

Following Small Steps was Method Air, who sounded more like early Small Steps than the current band does now. With their melodic intros and chord progressions reminiscent of blues standards, the band got progressively more spacey through each song.  Near the end of their set they covered Smashing Pumpkins’ song “Starla.”

Rounding up the lineup were History’s History and Mom’s Weekend. Both bands were similar enough to each other and the preceding acts to fit the bill, yet they both had their own unique take on the “punk/indie/whatever” genre. 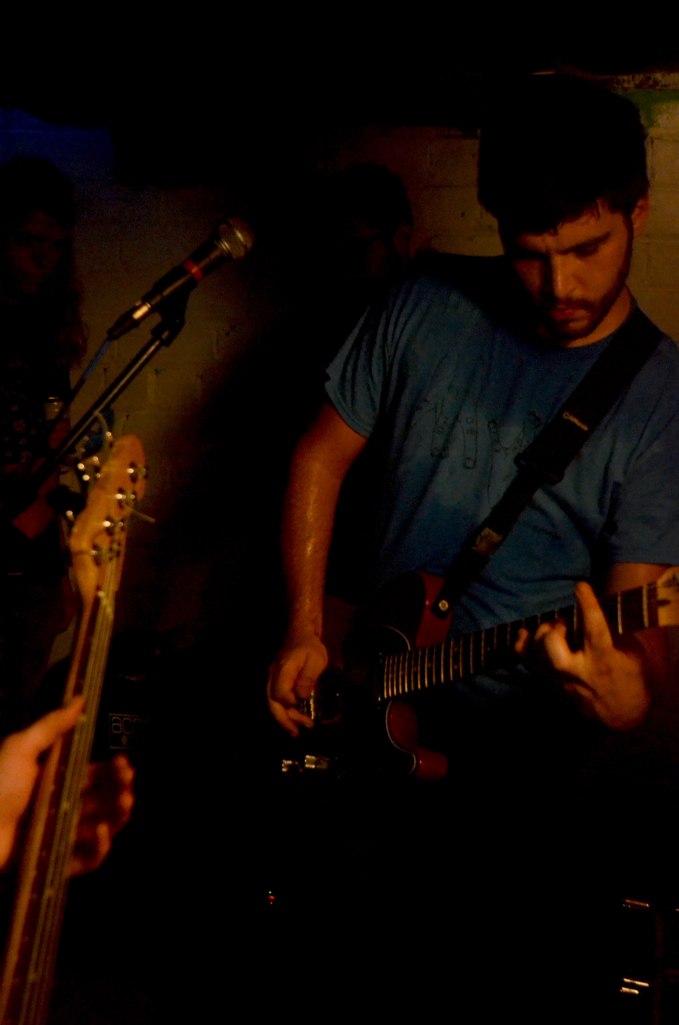 History’s History sounded mildly angry, but their songs were punctuated by hard steps into rhythmic levels. Mom’s Weekend played a set with a good amount of honest punk that didn’t dance around the fretboard too much, but ended the night with the right notes.

After the shows, most of the crowd migrated to the back yard, where Small Steps drummer Drew Davis ended up wrestling resident Trevor Simon. Simon appeared to have won, but considering the nature of the contest it was more for the action than any outcome.

Known as “The Wolf Haus,” the venue contrasted with the basement-based show of The Castle. The musicians set their instruments up in a small recessed room off of the kitchen that became inundated with people as the show proceeded.

The house itself is located across the street from a cemetery, and while the show may have awoken the dead, it did not cause any corpses to call in a noise complaint. Around 9:4,5 a dozen people streamed into the building one by one, and the first act, local alternative rockers Bixford, took the stage.

Bixford played a set heavily soaked in 90’s alternative fare, partly a result of drummer Jaron Takach’s love of Red Hot Chili Peppers, which he, and other band mates, cite as their biggest influence. “By the Way” by RHCP was one of their covers, alongside originals with such focuses as West Green on campus and the love of altered consciousness.

Following Bixford was The Shafer Street Fugitive, who featured Wolf Haus resident Mitch Rossiter on bass guitar. The band has an interesting mix of screamed hardcore vocals and accompaniments from both a synthesizer and horns, serving as a loud juxtaposition of everything alternative. 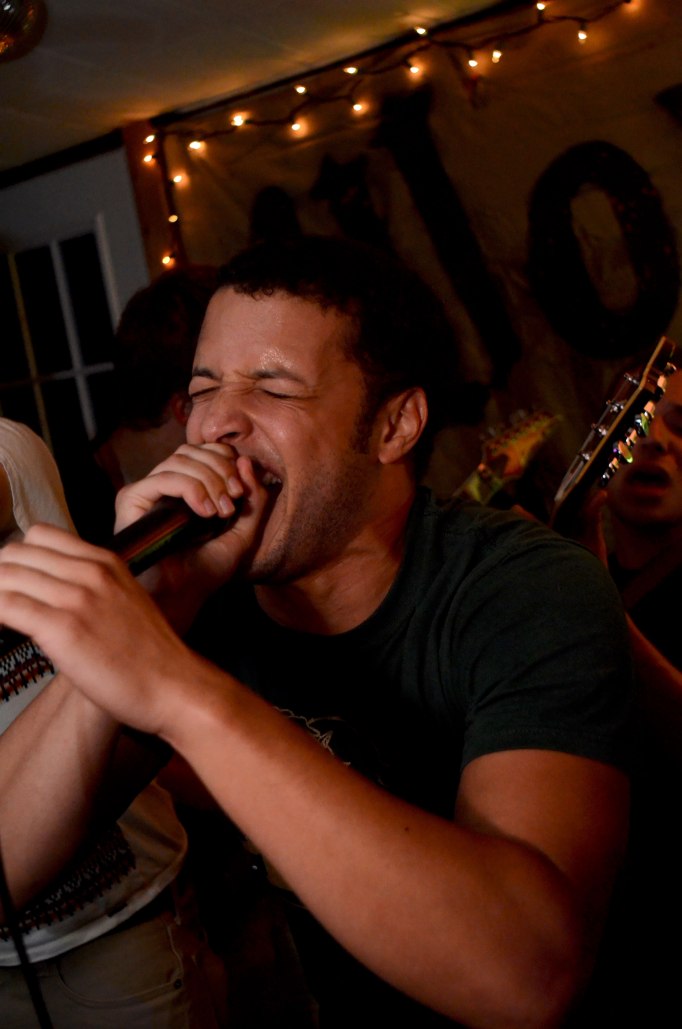 The mash-up of genres may be a result of their inception, when co-vocalist David Butler met Guitarist Nick Shega while in the back of the line for uniform fitting for OU’s Marching 110. Over time and with the addition of four other members, including Cody Dixon, guitarist and bandmate of Butler’s since middle school, the band formed its current lineup.

The Shafer Street Fugitive’s name isn’t derived from the fugitive who prompted the university to close down in January 2013 (and led to the infamous “Fugitive Fest”), but a similar instance a year prior.

The band will be playing with Milford, Ohio’s Fenrir at The Union Bar and Grill on this Friday, Sept. 13, and will be opening for space-themed technical death metal band Rings of Saturn at Kobo Live in Columbus Oct. 1.

Bassist of The Shafer Street Fugitive Mitch Rossiter joins in for one of his band’s jams. CREDIT: Evan Chwalek

After the bands, an electronic set by DJ Kashmerik  ended The Wolf Haus’s night of music. The artist played hard-stomping house tracks to a thinned, but vibrant, crowd. The night concluded with the DJ’s sounds as beer bongs drained and the fridge’s ever-changing arrangement of magnetic letters announced a host of crudely-written obscenities.

This weekend was a great “welcome back” for any of the kids involved with the Athens house show scene. It marked the opening of a new venue and the return of an old one, and showed that Athens still craves a music scene far from the stages of bars and auditoriums.

Interested in the scene? Here’s a link to an FB page that’s updated with house shows, ACRN events and bar shows. Follow Speakeasy via Twitter and Facebook for more coverage like this — the Athens Steez will be a reoccurring story series about house shows in Athens.