The demon’s laugh echoes around the table in senior Kyle Moyer’s Athens apartment as his fellow Dungeons & Dragons players point and giggle at the result of his dice roll. The d20, a 20-sided dice, came up as a one. With such a low result, the group’s Dungeon Master, colloquially known as the DM, ascribes Moyer’s (Ragnar’s real-world counterpart) attempt at heroics as a total failure, narrating the dwarf’s comical tripping to the amusement of the gathered group.

Moyer has been an avid tabletop games enthusiast for most of his life. In his youth, he worked in his family’s comic book store, playing everything from elaborate wargames to  card games. Moyer only recently started playing “Dungeons & Dragons,” or D&D as it is known by the initiated, in the past two years.

“Dungeons & Dragons” is a fantasy roleplaying game first published in 1974. Its designers, Gary Gygax and Dave Arneson, got the idea after adapting the rules of the medieval miniatures wargame, “Chainmail,” to focus on fantasy heroics of individual characters. “Dungeons & Dragons” is one of the best-selling and most well-known tabletop roleplaying games, making more than $1 billion in book and equipment sales with an estimated 20 million players, according to a report by the BBC. The fantasy world escapism offered by D&D remains a thrilling and compelling temptation for many gamers today.

Though a large part of the D&D gaming demographic is male, it’s not unheard of for women to play the game. Based on a survey conducted by Wizards of the Coast, D&D’s publisher since 1997,  2.25 million people play monthly or more often and 19 percent of gaming respondents are female. Ohio University senior Meaghan Basilone played D&D for the first time after going to hang out with a friend. 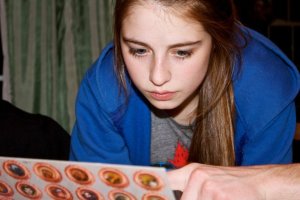 “While my friends are nerds, the ones I know who play don’t live in their mom’s basements,” Basilone said, “and most of them do fine with the ladies.”

She recommended D&D to people who already have an interest in similar games or in the fantasy genre, adding that they wouldn’t have fun if they weren’t at all interested.

Beneath all of the pages of rules and legions of miniature heroes and monsters lies the core of the “Dungeons & Dragons” experience: the social interaction between players, namely the Dungeon Master and the player characters. Moyer insisted that having a skilled and knowledgeable DM is paramount to having a great D&D experience.

During a game, the players take on the roles of heroic characters, from gallant knights to stooped wizards, and form their own adventuring party. The players participate in a cooperative storytelling experience that includes dice-rolling to resolve conflicts and improvisational roleplaying. The Dungeon Master is the rules-lawyer, dictating which actions succeed or fail; chief storyteller, playing the parts of all non-player characters, such as shopkeepers, villains, bystanders and mediator, who resolves any conflicts between players at the table. 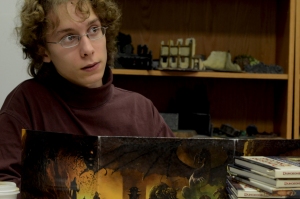 Unlike other tabletop games or video games, D&D leaves control entirely to the players. Whether they confront the dastardly villain in his fiery tower or flee to the countryside to live among the gnomes, the game is in their hands. Moyer added that the only limitation to D&D was the lengths their Dungeon Master was willing to go.

“I’ve had DMs where it was this world they’ve made and you could pretty much do anything within reason,” Moyer said. “It’s up to you to figure out what you’re capable of doing within the restrictions of the rules of the game.”

Like many aspects of “Dungeons & Dragons,” the location of play is flexible. While many games take place around a dinner table where there’s room to spread out maps and grids, along with miniatures, reference books, character sheets and Mountain Dews, Moyer said he’s played anywhere from couches to coffee tables and even in a car.

“We were driving to Cincinnati and there were three people in the car. I was in charge of the campaign, but I was driving,” he explained. “They were rolling on top of a book so they had a flat surface while we were driving down 32.”

Despite the vast body of rules and regulations in existence, “Dungeons & Dragons” remains a relatively fluid and intuitive game. What rules the group chooses to abide by is at the discretion of the DM and the players, further reinforcing the importance of the group’s social dynamic. Saunier stressed the importance of finding the right group to play with. 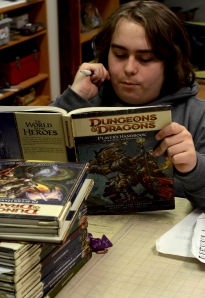 “I chose the friends I play with now based off their theatrical skills and ability to read and process the serious amount of information the game requires,” he said. “’Dungeons & Dragons’ is a game of imagination and interaction. Without social skills, you just plain aren’t good at it.”

“Having a party with your friends, you know what they’re going to do. They’re not just going to sit there and do nothing the whole time,” he added. “You have a little bit more camaraderie as you play.”

Part of D&D’s success in comparison to similar roleplaying games lies in the relative popularity and accessibility of the fantasy genre. There aren’t many people who haven’t seen Peter Jackson’s “Lord of the Rings” film trilogy, which, along with the Tolkien novels themselves, serves as a sort of launching point into the genre.

Moyer said that the fantasy setting of D&D is one of the main reasons he prefers it to other roleplaying games.

“You didn’t really get to do as much crazy stuff because you’re playing a normal human,” Moyer said. “In D&D, I’m a wizard. I can throw fireballs at my enemies if I feel like it.”

In the modern age of video games, which grow more and more sophisticated every year, it is surprising that “Dungeons & Dragons” remains popular. Dice-rolling and pencil-and-paper character sheets seem almost rustic compared to the ever-improving graphical fidelity and immersion offered by video games. However, these games lack the freedom and flexibility loved by pen-and-paper D&D players.

“Roleplaying games take far more commitment and involvement to play them correctly,” Saunier said. “They are far from mindless or routine.”

Moyer pointed out that “Dungeons & Dragons” doesn’t have the same limitations as videogames. Even the most dynamic game is restricted by the limits of its programming. D&D is free of those limits.

“You get to immerse yourself into a fantasy realm and you get to make up what you’re doing and have a good time with your friends,” Moyer said. “You have the freedom to do whatever you want.”