Editor’s note: Tabletop Thursday is a column by staff writer Danny Susco about tabletop gaming in Athens. This is the first installment in the series.

Our good friends at Wizards of the Coast are spellcasting again by expanding their most name-appropriate card game – Magic: the Gathering’s newest set, beginning its own block and plane of existence. Now we go to the plane of heroes and titans: Theros.

Like this guy (from the Wizards of the Coast site)

Heliod is named after Helios, the Titan who embodies the sun charging across the sky on his flaming chariot. Thassa is named for Thassos, an island in the northern Aegean Sea. And Erebos was named for one of the first five beings that came into being out of Chaos, representing darkness, or sometimes for the region of the Underworld where the dead have to pass immediately after death, or even sometimes as a name for the Underworld itself. As for the other two, Zeus only knows where they got those from. 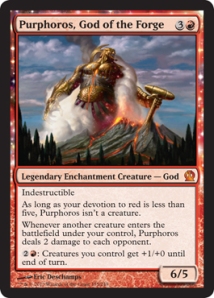 Each are cheap to play, indestructible, give you a major leg up, and rely on one of Magic’s newest gameplay mechanics – devotion.

Devotion to a certain color relies on the amount of times the color mana symbol appears in the mana costs of creatures you control to give you certain effects. Cool new effect, there.

Well, the other effects aren’t so bad. Creatures can now be Heroic (which is usually applied to humans) – something happens whenever you cast a spell that targets them. Then there’s Monstrous (which is applied to Hydras, Titans, and such), which makes you pay their Monstrous cost to give them +1/+1 counters and some added effects, like how Hundred-Handed One (modeled off of a Titan) which can block up to a hundred creatures while monstrous. The last new mechanic is called Bestow – basically it makes your creature into an aura enchantment. If it’s unattached for any reason, it turns back into a creature.

All that said, it’s nice to see that Magic the Gathering is getting back to the classic spells, like turning bands of warriors into pigs. 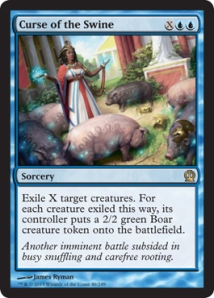 People have already jumped on the opportunity to pick up packs of this new set. Many chose to preorder, like Nick Barker, a freshman studying music education, who preordered a “fat pack” of nine packs online.

“I’m really excited for it,” he said. “I really like the Greek mythology.”

The official release date is this Friday, September 27, and then we will all see whether we are truly heroic, or truly monstrous.

Are you obsessed with MTG? What do you think about Theros? Tweet us about it, or post in the comments below!

One thought on “Tabletop Thursday: Getting back to the Greeks with Magic”