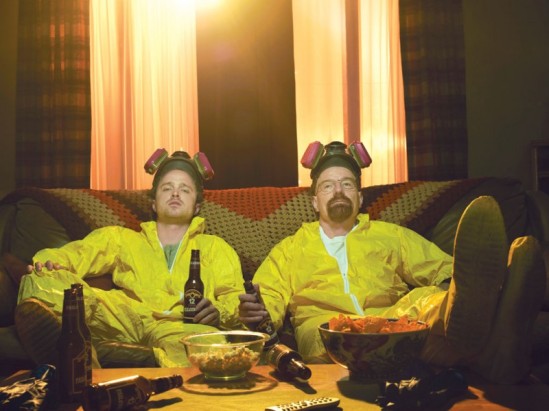 Walt and Jesse taught us so much over the years. Like, never try to dissolve a body in a bathtub. Photo from Standard.

Warning: Major spoilers below! Seriously, if you haven’t watched “Breaking Bad” yet, what is wrong with you?

Most of us are still recovering from the series finale of future TV classic “Breaking Bad.” “Breaking Bad” left us with not only  the story of the man formerly known as Heisenberg, but some pretty valuable life advice as well. Here are a few lessons we learned from Mr. White and the gang.

1. Teachers need to be paid more.

Walter White’s titanic struggle in the first season to make money to pay for his chemotherapy, let alone for his family helped him make the decision to enter the meth business. He made lousy money as a high school chemistry teacher, and we can’t help think if he just got paid more as a teacher (or if he didn’t leave Grey Matters, but that’s a whole other story), none of this would have happened.

He was already having a hard time teaching students that were dozing off, and that was while he was lighting fires in front of the class. Just give teachers a couple extra bucks, and there would be less Heisenbergs in the world (okay, maybe not).

If anyone has ever been to Mexico and can answer this question, please let me know. Not sure if it was the pollution, but whenever the show did flashbacks with Gus or a trip with Walt down to Mexico, you couldn’t help but notice that everything had a slight yellow tint. Nice way to tell the difference between New Mexico and Mexico, since meth is apparently so rampant in both places!

They should have called it “Breaking Bald.” Photo from Entertainment Weekly.

Okay, how much did the hair stylist make for this show? The list of characters that sported the blinding dome goes on and on; Walt, Hank, Mike, Tuco’s cousins, Jesse (well, sort of), Hector and Huell distracted viewers from the action with their shiny heads. No complaints here, but does Vince Gilligan have a thing for bald guys or something?

4. Breakfast is the most important meal of the day.

Walt Jr. (or Flynn, as he wants to be called) was only good for eating breakfast and lashing out at his mom until the final three episodes of the series. Along with bald guys, Vince Gilligan had a breakfast fetish, as almost every awkward scene at the White household happened over breakfast. No matter what was served, “Breaking Bad” proved that breakfast is definitely the most important meal of the day.

5. If you want a durable car, go for a Pontiac Aztek!

“Breaking Bad” was known for some good product placement, from Fruit Loops to Ben and Jerry’s and even Chrysler, the Pontiac Aztek rose above all. Walt put this car through hell and back (really the only way to describe it). Yeah, the car went to the repair shop a few times, but when you run people over with it, you’d need a little TLC too. The car was eventually sold to the repairman for a cheap price in favor of the Chrysler 300. But if you loved that tan hunk of a car, you can actually buy it.

6. Anything can kill you.

Box cutter, exploding elderly people, Danny Trejo’s head on a turtle bomb, you name it, “Breaking Bad” used it to kill somebody. Give credit to the writers, they were that creative. Yes, the normal means were used (guns and knives), but we’ll remember those out-of-the-box deaths forever. My personal favorite? Walt killing Crazy 8 with a bike lock, or that meth addicted couple, when the husband’s head was crushed by an ATM machine. Yeah.

Walt takes a perfectly good pizza, and in a moment of anger, throws it on the roof. Poor roof pizza. Photo from AMC.

Who didn’t laugh when Walt threw that pizza on the roof? (They did that in one take. Impressed?) Or when Walt told off his old car wash boss when he quit his job? (“F**k you! And your eyebrows!”) The show’s classic humorous moments usually surrounded Walt getting angry and acting irrational (or Jesse’s “Bitch!” lines). It gave continued hope to angry comedians like Lewis Black that being that mad can equal big laughs if done right.  We will miss you, roof pizza. Let’s have a moment of silence.

This man makes just about every sketchy lawyer look like a saint (and that’s saying a lot). But Saul Goodman can get anyone out of trouble through his “I know this one guy” connections and large collection of pre-paid flip phones. Those commercials were poorly made, but honestly, we’d all go for him. He helped Walt and Jesse through many sticky situations on their journey, and it was only toward the end when he finally had to flee New Mexico.  By the way, I’m excited for the spinoff, but I’m also terrified…

Hank had one thing that helped him through the shooting that almost made him paralyzed for good – rocks! Oh, wait, sorry Hank. Minerals. Thanks for that fun fact. We’ll also never look at magnets in the same way, as they helped wipe the memory of a hard drive that could have brought down Walt’s entire empire. Though most people will only see magnets on our refrigerators, “Breaking Bad” fans will see magnets as a tool to ruin any evidence that could bring down your drug kingdom. Magnets, bitch!

Walter White’s name will forever be mentioned alongside Archie Bunker, Columbo, J.R. Ewing, Jerry Seinfeld and Tony Soprano as the TV characters that defined the medium. We saw a transformation from “Mr. Chips to Scarface” as creator Vince Gilligan put it, and he will stay in our hearts forever. The mild-mannered chemistry teacher turned merciless drug lord kept us glued to our screens for the past five years. This beautifully written and acted role drove this show through all of its highs and lows (including that fly episode). Heisenberg is an alter ego that we have never seen on TV, and I doubt that we ever see again. The struggle of lung cancer and a family falling apart drove him into building a meth empire. Even when his kingdom fell apart and his cancer returned, Walt didn’t quit until he finished his business. When he died, we all teared up – admit it. All bad things must come to an end.

All joking aside, “Breaking Bad,” has closed its lab, but we will always get that high from watching it. Vince Gilligan created a story that drew us in and kept us wanting more. Critics always loved the show, but it took a while for the viewers to build (thanks to Netflix and online streaming deals). Though the show was a risk taken by AMC and Sony Television, it paid off, and became a show considered one of the best in TV history. We will miss this show, but we will remember its lessons for many years to come. Well done, “Breaking Bad,” here’s to a show that was 99 percent pure greatness.

What life lessons did “Breaking Bad” teach you? Share your memories with us in the comments, or talk to us on Twitter @SpeakeasyMag!