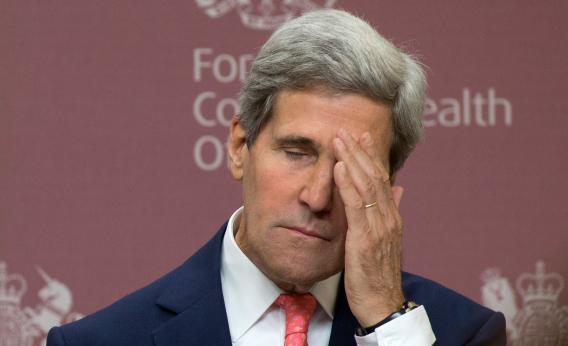 Unless you’ve been living under a rock, you’re probably aware of the chemical weapon commotion that is taking place in Syria.  Syrian president, Bashar Al Assad, was accused of using chemical weapons against Syrian dissidents, despite receiving multiple warnings from President Barack Obama. Most countries opted out of military intervention, excluding the United States, France and the United Kingdom.

A joint press conference taking place in London seemed to yield no definitive answers.  But in a strange turn of events, it appeared as if Secretary of State, John Kerry, inadvertently offered to suspend talks of a strike on Syria, provided that they hand over all their weapons to the international community (woopsy!).  To conclude the gaff, he made the comment that, “he’s not about to do it and it can’t be done, obviously.”

Apparently, Assad caught wind of this and thought, “well hell, I could do that” and wasted no time to inform the United States that he would turn over the weapons to the custody of Russia.

Speaking at a United Nations conference, Obama told the world that he would temporarily put a hold on the congressional vote for a strike, until the diplomatic proposal proved itself to be a worthwhile resolution.  It’s unclear if he actually liked the idea, or just had to commit because John Kerry stumbled up on stage and totally blew it.

One thing’s for sure, however, and that’s the fact that the Ohio University students I’ve talked to largely oppose a military strike on Syria.  Perhaps it’s the memory of George Bush incessantly rattling off cries that claimed weapons of mass destruction in Iran, or maybe we see ourselves as wising up by rejecting the prospect of another conflict in the Middle East.

Still, there were some that fell between the two potential courses of action.  Senior Business Economics major Jordan Bringman identified himself as being in the gray area. “Although I do stay informed on the issue, I feel as if the political situation behind the scenes makes it too complex to make a definitive decision regarding my opinion,” he said.

Despite a great deal of discussion in the international community, the issue in Syria remains up in the air as we await the result of the diplomatic solution. But stay tuned folks, the process has already begun.  Seriously, it’s a little more important than Miley Cyrus licking hammers.

One thought on “OU student opinion split on Syria issue”