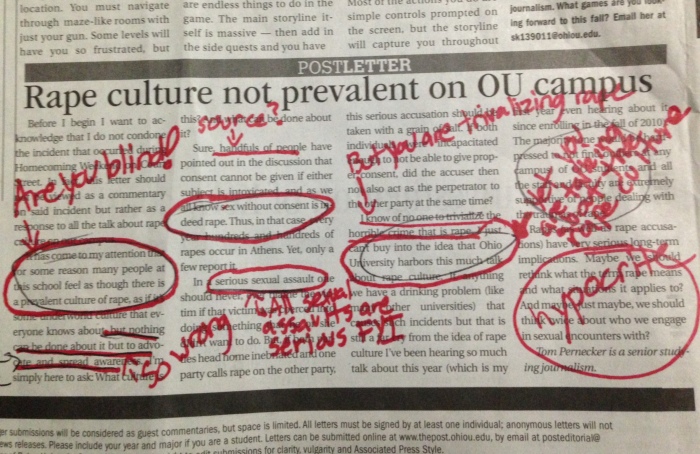 To those who believe “rape culture (is) not prevalent on OU campus,”

If both parties do not give enthusiastic consent, then sexual acts should not occur. Period.

For those of you who consider there to be no rape culture on campus, look at the rape that happened over Homecoming weekend. Bystanders stood by and watched Saturday night while a man performed oral sex on an overly intoxicated woman on a Court Street sidewalk. But worse than no one stepping in, gawkers took videos and photos and proceeded to post them on social media. The next day she reported rape to the police.

Many people questioned the existence of the rape culture on OU’s campus. There was an open rally and parade bringing awareness about OU’s rape culture the night before the publicized rape. Clearly the issue at hand was already on students’ minds.

Take into consideration FuckRapeCulture’s statistic that one in four women at OU have or will be a victim of sexual assault. That appalling statistic alone proves that there is a definitive problem pertaining to rape on the OU campus.

The opinion article published in Wednesday’s Post by Tom Pernecker, a senior majoring in journalism, is laced with inaccuracies and inconsistencies.  As a journalist, I’m surprised by such an outlandish letter.

Pernecker has the audacity to state that  victims only “in a serious sexual assault” should be consoled. All sexual assaults are serious. No matter the situation, all rape is unwanted. What makes one person’s sexual assault more serious than another’s? Each victim needs our support.

In the letter, he defines rape as “as we all know sex without consent is indeed rape.” Then he backtracks and states there needs to be a new definition for rape stating, “Maybe we should rethink what the term rape means and the situations it applies to?”. Both parties must agree; otherwise it is rape. Pernecker cannot make a definitive stance; therefore, he just undermines his own argument.

The drinking feeds into the issue of sexual assault. Unwelcome lines are crossed while drinking and then sexual assault occurs. But he overlooks the fact that assault also occurs when people are not drinking alcohol. Alcohol can play a factor in rape, but it’s not necessary.

One plus, Pernecker accurately states that a high number of rapes occur on campus. Yet, people do not report their rape. Yet again another point supporting the rape culture. Perhaps these victims do not come forward because they feel ashamed. But there is nothing to be ashamed of. Rape victims have been sexually violated and are not in the wrong. I plead you to remember and acknowledge that fact.

Pernecker states in the beginning how he does “not condone the incident during Homecoming Weekend on Court Street.” However, he alludes to blaming the victim as well as the perpetrator when he says, “just maybe, we should think twice about who we engage in sexual encounters with?”.

Place yourself in the Homecoming assaulted woman’s shoes. Her assault not only has been posted locally on social media, but now has gained national recognition. Now the rape survivor must deal with the aftermath of her sexual assault and cope with the unwanted limelight.

This event is a reflection of our campus. No one stepped in. No one nearby came to her defense. That in itself proves that a rape culture exists because this somehow was considered normal by bystanders.

Not all Bobcats feel this way. Today I am ashamed to claim myself as a member of this community. I hope for change. There needs to be a shift on campus.  I don’t understand those who are refusing to acknowledge the rape culture. Now is the time to educate yourself about sexual assault so future sexual assaults are prevented.

Concerned and fed up,