Ohmygosh, Katy Perry has a new album! We can’t wait to–zzzzzzzzzzz . . . Photo from Pop On and On.

In the world of pop music, if you want to survive, you gotta have a gimmick. Katy Perry’s gimmick doesn’t look terribly unique at first glance: she’s built a brand on rainbows, candy motifs and “girl power” (for lack of a better term for the very shallow brand of empowerment she dispenses). Didn’t the Spice Girls do a pretty similar thing (and do it better) in the ‘90s?

But Katy Perry has another layer that makes her stand out. It’s a veneer of patent insincerity and nastiness that turns the sweetness sour with its mere presence (witness the sweeps-week gay-baiting of “I Kissed a Girl”).

Perhaps that’s for the best, though. Perry’s abilities as a singer are incredibly limited, as evidenced by her striking underperformance on lead single “Roar.”  While the track plods along in its generic, boring, too-slow-to-jam-to way, with lots of space laid out for a performer who could really belt it out, Perry’s feeble off-key yelps don’t inspire much confidence or energy, and the clichéd “yay me” platitudes that pass for lyrics certainly don’t help. (Really, Katy? “I’ve got the eye of the tiger?” Have you no shame?) 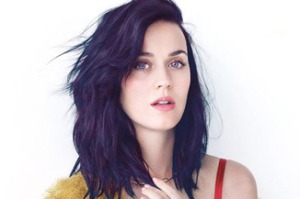 More like “you’re gonna hear me SNORE,” right? Right? … We’ll show ourselves out. Photo from Hitfix.

And forget about her showing emotion convincingly, either. Her “passionate” proclamations of love on “Unconditionally” and “Legendary Lovers” come off as unintentionally funny as a result of her hammering out the syllables of the titles like a bad community theater actor (“lovers” sounds like “lavas” upon first listen). Her attempts at getting quiet and thoughtful aren’t much better, since the drippy “By the Grace of God” suffers from her constantly straining for high notes that she can’t quite hit (a consistent problem throughout the album).

That would be fine if there was anything lyrically interesting to distract from the poor singing. Alas, Perry’s lyrics are still clumsy as ever, whether she’s awkwardly cramming too many syllables into one line in an attempt to force meter (“Unconditionally,” again), indulging in weird, labored love = religion metaphors (“Heaven is jealous of our love,” she muses on “Walking on Air,” in one of the less amateurish lines) or just being straight-up lazy and clichéd on “This Is How We Do,” a “Last Friday Night” redux without any of that song’s energy. This song features quite possibly the dumbest lyric of Perry’s career: “Now we’re talkin’ astrology, gettin’ our nails did all Japanese-y/Day-drinkin’ at the Wild Cat, suckin’ real bad at Mariah Carey-oke.”

In Katy Perry-Land, lost lovers are “Ghosts,” Cleopatra and Juliet are “legendary lovers” worth comparing oneself to, and a new love is “made to fit like a fingerprint” and “like a double rainbow.” Seriously? Referencing memes is a legitimate way to declare your love now? Prepare for the deluge of Scumbag Steve proposals, then, ‘cause it’s gonna be huge.

On the bright side, “Prism” is slightly more musically interesting than Perry’s previous efforts, which all adhered pretty closely to the Top 40 dance-pop template. Here, she dips into such varied sources as ‘90s house music on “Walking On Air,” with its irresistible piano line and bubbly synths, as well as banghra on “Legendary Lovers,” which has a flashy breakdown that almost makes up for the dorky songwriting.

There’s even early Prince-style funk on “Birthday,” the best track here. It’s a genuinely cute, happy song that requires very little of Perry vocally (thank god) and is invested enough in its own campiness to be dance-worthy.

But for every musical idea that works, there’s still several that don’t quite make the grade. The woozy, grime-ish “Dark Horse,” with its grinding beat and superfluous Juicy J guest spot, is an adventurous move, but never quite builds to anything beyond its initial impression. “This Moment” has a groovy bassline, but it was probably only thrown in to hide how boring the rest of the song is. And “Double Rainbow” is nowhere near as colorful as the title suggests, just another wishy-washy mid-tempo ballad on a track list full of them.

Overall, there’s nothing really offensive or irritating here, as was often the case with Perry’s previous efforts. “Prism” is just kinda boring and hokey in its attempts to be “mature.” While it is an improvement from the party-girl crap Perry’s put out before, it’s not worth much of your time. Our advice? Buy “Birthday,” skip the rest, and go back to waiting for Lady Gaga’s “Artpop” to drop.