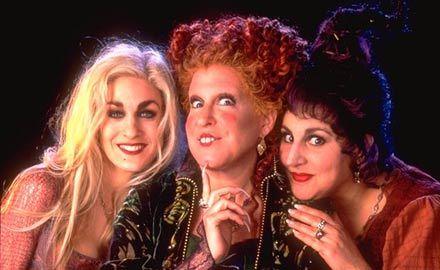 It’s inevitable – the day we’re forced to retire our Halloween baskets for good. They told us we were “too old” to Trick or Treat. As badly as we’d love to disagree, a grown person dressed in some ridiculous costume begging strangers for candy does sound pretty ridiculous.

As we look down at the streets below from our bedroom windows Halloween night, trick-or-treaters dressed as princesses and pirates and Iron Man scurry from door to door, collecting handfuls upon handfuls of sweets. The Halloween spirit within us dwindles and we’re left wondering how we’ll spend our Halloweens from that point on.

To comfort our free-candyless souls, we’ve compiled a list of “The 5 Best Halloween Movies to Watch Halloween Night Since We’re ‘Too Old’ to Trick or Treat”.  Snag some of your younger sib’s candy and enjoy.

1 – “Hocus Pocus” has always been a fan favorite. It’s a family friendly, feel-good kinda movie with great music and brilliantly developed characters. After three Salem witches (one of which played by Carrie Bradsh – I mean, Sarah Jessica Parker) are resurrected from the dead, it’s up to two teens, a young girl and an immortal cat to put an end to the witches’ reign of terror. Although the movie takes place Halloween night, the movie is enjoyable year-round. Be forewarned, however – “I Put a Spell on You” will be stuck in your head for days.

2 – “Poltergeist” may been released over twenty years ago, but to this day is believed to be one of the scariest horror flicks of all time. It was named one of Bravo’s Scariest Movies of All Time and the Chicago Film Critics Association named it the 20th scariest movie of all time. The “Poltergeist” franchise is believed to be cursed, due to the absurd number of premature deaths of several people associated with the film. “Poltergeist” focuses on a suburban family whose home is invaded by malevolent spirits who possess the family’s youngest child. If the 1982 version of “Poltergeist” isn’t enough to scare your socks off, a remake of the horror flick is expected to be released sometime in 2014.

3 – Like “Hocus Pocus,” the 2007 version of “Halloween” has become a favorite among young adults. Like the original, “Halloween” focuses on Michael Meyers, who, at the age of six, murders his family. After being locked up in a psychiatric hospital for 15 years, he escapes and his reign of terror continues. “Halloween” is definitely a must-see horror flick. It’s gory, over-the-top and will have you peeking through the spaces between your fingers to see what happens next.

4 – Tim Burton managed to mystify us all (yet again) with “Corpse Bride,” a fantastical, magical stop-motion-animated film featuring Burton’s partner-in-crime, Johnny Depp. After a man practices his vows in the presence of the ghost of a young woman, she rises from the grave assuming he had married her. The rest of the movie follows the man and his corpse bride’s journey through The Land of the Dead as well as many other twists and turns. Burton’s dark, macabre style movies, like “Corpse Bride,” will put anyone in the Halloween mood.

We wonder if Beetlejuice knows how to twerk. Photo from Fanpop.

5 – “Beetlejuice” has received tons of buzz since Miley’s VMA performance two months ago, when she twerked on Robin Thicke, who was decked out in a suit resembling that of Beetlejuice’s. But Robin Thicke’s VMA’s ensemble isn’t the only reason to watch the 1988 Tim Burton directed fantasy film. “Beetlejuice” remains one of the most popular comedies of all time among people of all ages. It’s charming, witty and anticlimactic in the best way possible.

We may be too old to participate in EVERY activity Halloween has to offer, but it doesn’t mean we’re exempt from participating in Halloween altogether. Whether it be horror flicks, carving pumpkins, or stuffing our faces with candy corn to the point of regurgitation, Halloween can be celebrated in many ways by people of all ages.

HallOUween, on the other hand, is a different story.