The clock strikes 2:00 a.m. I’m sitting on the bed in my dorm. My sheets aren’t identifiable, they’re so messy, scrunched up in the corner like a pile of ghost scat. My Macbook Pro’s brightness is turned up to 11. Eyeballs are deserts, I’m completely hunched over. I look scoliotic, kyphotic, and psychotic. But, whatever, I’m winning this round.

This is my life on a nightly basis. I go home, finish my work, FaceTime my girl, and log on to Salty Bet. Wash. Rinse. Repeat. I’ve been in the groove for about three weeks. Is this a problem? Am I wasting my time at this university, only for the occasional satisfaction of winning a match?

The accepted logo for Salty Bet, courtesy of User JayFordGraphics on Deviantart.com

Before I delve any further, allow me to explain my affliction thoroughly. For the past few weeks, I have frequented the website, SaltyBet.com, every single night. Said website is currently taking select parts of the Internet by storm, having accumulated over 4,000 likes on Facebook, and over 8,000 followers on Twitter. SaltyBet’s main page has massive amounts of traffic, with thousands of unique visitors tuning in at any given time, on average. I happen to be one of them. My name is Lucas, and I have a problem.

But you deserve an explanation. Salty Bet is a fairly new website that, 24/7, broadcasts a Twitch.tv stream (i.e. a live, “streaming” video) of the indie, open-source fighting game, “M.U.G.E.N.” (which you can download for free here.)

Twitch.tv itself has been rising in popularity recently due to its dedication to hosting all types of streams in the world of competitive gaming. Extremely popular games to watch and play, such as “Starcraft II,” “League of Legends,” and “World of Warcraft,” have various channels on the site where anyone can tune in to watch a tournament, playthrough, etc.

However, in terms of originality and conceptual genius, SaltyBet.com takes the cake.

The formula that makes Salty Bet so tantalizing lies within the execution. One of the benefits of streaming “M.U.G.E.N.” rather than, let’s say, “Street Fighter IV,” is that the former game is incredibly easy to modify and edit.

There is an entire web community dedicated to crafting unique characters (albeit, mostly copyrighted) with varying move sets for the sole purpose of watching them battle. This means you can have a fight between Batman and Optimus Prime, or Goku from “Dragonball” vs Scorpion from “Mortal Kombat,” or, hell, you could even have a man wearing a skirt face off against Barney the Dinosaur. I think my editors will give me permission to say “that sh*t cray,” just this once. 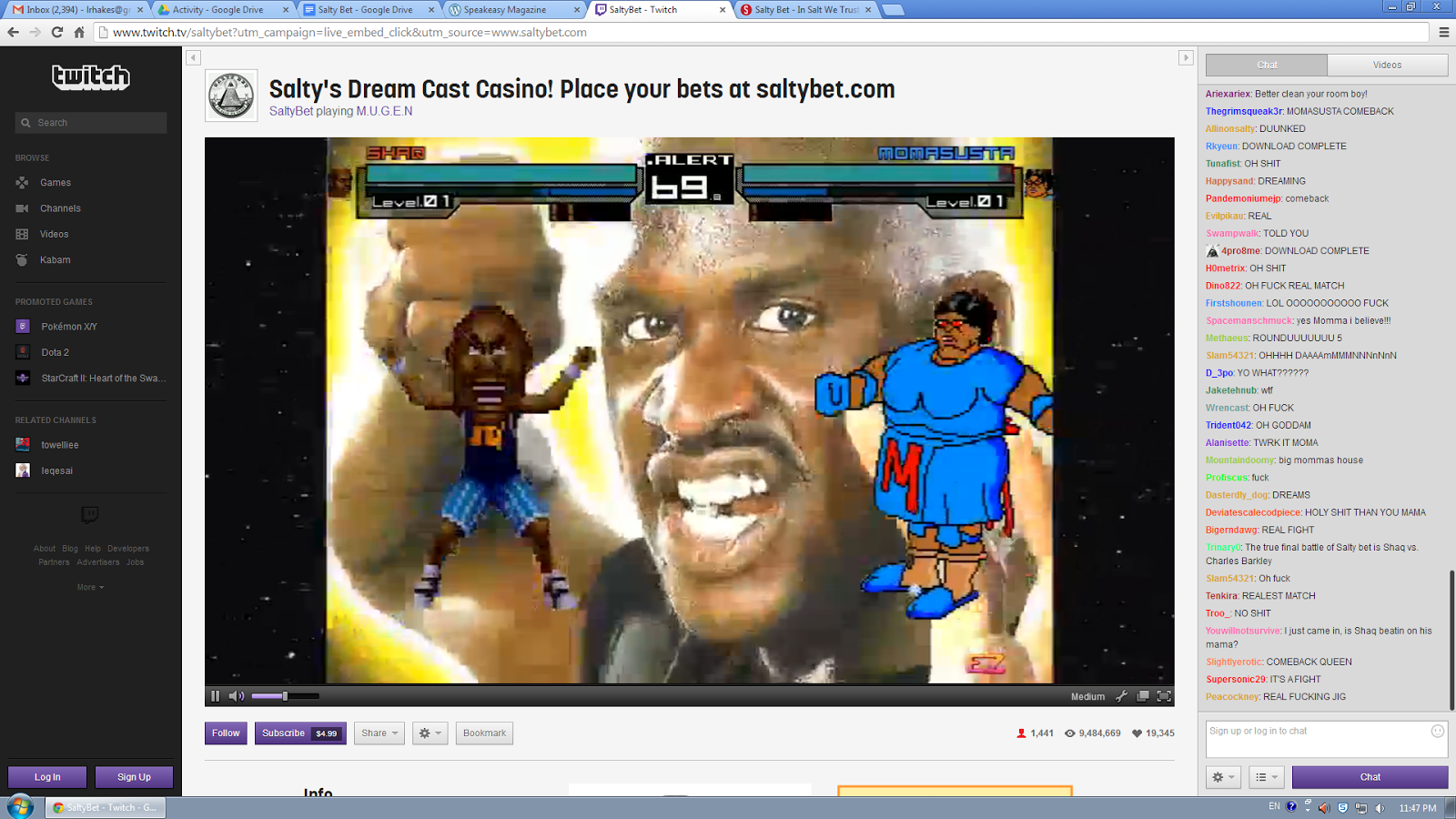 What really makes Salty Bet interesting, though, isn’t simply that it pits two randomly generated characters from the “M.U.G.E.N.” database (which is colossal, I’ll have you know) against each other. No, no, no, my beautiful, sexy, hot, pretty reader. The addictiveness lies within the fact that you can bet cash money on which character will win.

Actually, that’s a half-lie. You bet “Salty Bucks” on which character will win. However, the rage you feel after you lose half your money betting on a “Dragon Ball Z” scrub is oh so genuine, and the chat (which is hilarious, by the way) validates that every single match.

Speaking of rage, that’s what the site’s name is referencing. “Salt.” A.K.A. the stuff that’s in your tears when you’re losing like the blubbering milquetoast your father always said you were. But it’s all in good fun! The money, much like the fights, aren’t real; the only thing you’re wasting is your time, and in a hustling, bustling college environment, isn’t that what we all need?

I thought it might be a good idea to interview the mastermind behind the three-ring sh*tshow: an androgynous, faceless character who goes by the name of “Salty.” We communicated via email. Here is a record of our correspondence:

What is Salty Bet, in your own words?

Salty Bet started off as a website that lets you place bets on competitive events being streamed live (mainly video games being played on Twitch.tv). That being said, Salty Bet has become a 24/7 fake money casino that uses “M.U.G.E.N.” to create an endless stream of two AI controlled video game characters duking it out.

What compelled you to start Salty Bet? More specifically, what gave you the idea of pitting two “M.U.G.E.N.” creations against each other?

I started Salty Bet because I enjoy watching gaming competitions, and adding the betting meta-game makes them much more fun to watch! As a fan of fighting games in particular, I thought about ways to keep Salty Bet running when there weren’t any competitive gaming events happening. Naturally, I started experimenting with “M.U.G.E.N.” – a fighting game engine that has been around for many years and allows endless customization. There are also a ton of characters available that were created by talented authors. There are so many ways to continue to expand and improve upon this system that AI vs AI matches have become the focus of the site!

Was it complicated getting Salty Bet off the ground?

It has definitely been a bit tricky at times, mainly dealing with technical issues and gaining a viewership. It’s been going well so far and there’s a great Salty Bet community that keeps it going!

Your website, I’ll have you know, is not aiding me in my struggle with chronic insomnia. Why is this site so addictive?

I think it’s a combination of the hilarious chat, the awesome characters (whether they be good, bad, or just crazy), the music playlist, and the fact that it’s running 24/7!

How do you balance the matches?

Just a couple of days ago, I introduced a matchmaking system! Basically, it looks at all of the character’s win/loss ratios and places them in a tier accordingly. Characters are then simply matched up against each other within their tier. Also, there’s a compendium feature that breaks down all of the tiers and allows users to spend their Salty Bucks to make a few minor character adjustments.

What is your perfect match-up? They don’t have to be strictly “M.U.G.E.N.” characters.

I want to see Daigo and Justin Wong playing “M.U.G.E.N.” in a first to 15 while randomly selecting from the Salty Bet roster. Part of being a great fighting game player and competitive gamer in general is the ability to quickly adapt to an unknown match up, so I’d like to see how a top player handles learning completely new characters on the fly.

Would you care to explain what the “Salt Mines” are?

Being in the Salt Mines means you’re in a state of absolute desperation. You know you’re in the Salt Mines when you go all in every match, hoping for the slight chance that there’ll be a dream upset. I like to think of the Salt Mines as a state of mind rather than a specific number. Everyone has their own idea for how much money releases you from the mines, and I’ve heard anywhere from $1,000 to $10,000.

One thought on “Exploring a new, salty addiction”