Over the course of three days, the Mid-American Conference featured six games that eliminated some teams from contending for the conference championship and helped to put others over the edge. Bowling Green took Ohio out of contention for the MAC East with a 49-0 victory, while Toledo held on to their hopes off a collapse from Northern Illinois by defeating Buffalo 51-41 and maintaining a 5-1 record in the MAC. Northern Illinois broke its tie with Ball State at the top of the MAC West and continued their best season-opening win streak to 10 games with a 48-27 victory. Meanwhile Central Michigan defeated Western Michigan 27-22, Kent State continued Miami’s winless season with a 24-6 victory over them, and Akron took a close 14-13 victory over Massachusetts.

The last game on that list takes us back to the first MAC Blog of this year, when new coaches were making waves to help fix bottom feeder teams. With the victory over Massachusetts, Akron earned its first four-win season since 2007. Most of that is thanks to the great coaching effort from Terry Bowden and possibly added help from having Jim Tressel around the team. It’s been a long time since Akron was truly relevant in the MAC, but they could soon be big players soon.

Offensive Player of the Week: Jordan Lynch, QB, Northern Illinois. He has done it again. Northern Illinois continues a 10-win streak and are now ranked 16in the BCS. This is all thanks to Jordan Lynch’s incredible play this season. Against Ball State, he completed 26 of his 32 passes for 345 yards and two touchdowns, his most yards thrown for in a game this season and second highest adjusted QBR at 83.2. He also ran the ball 20 times for 123 yards and two touchdowns. He continues leading the team into BCS contention once again, and after the game, his head coach told ESPN he believed Lynch should be on the shortlist for the Heisman. It may be possible he’ll be a Heisman contender at the end of this season.

Defensive Player of the Week: BooBoo Gates, DB, Bowling Green. He intercepted one pass from Ohio quarterback Tyler Tettleton, returning it for 82 yards. He also managed to get five tackles on the evening, but probably the best attribute for him was his leadership. Gates managed to lead the defense to holding Tettleton to an adjusted QBR of 6.0, the lowest of his career as a starter.

Goat of the Week: Miami’s Quarterbacks. Drew Kummer went 3-for-9 for just 45 yards. Austin Gearing went 2-for-5 for 19 yards and an interception, but at least he had 81 yards on 24 carries. Either way, these two were simply horrible. Kummer only had a 9.6 adjusted QBR, while Gearing had a 4.2, which seems terrible, but it’s only his fourth worst game of his career. Miami is winless this season, and terrible quarterback play is a pretty big reason.

Game of the Week: Buffalo at Toledo. Buffalo came into the game undefeated in the MAC until this season, and Toledo could have been near eliminated from MAC West contention with a loss. Toledo came out tough and took a 51-41 victory that had everything. Buffalo quarterback Joe Licata threw for 497 yards and four touchdowns, with eight throws completed to Alex Neutz who had 168 yards himself. Meanwhile, Toledo had Kareem Hunt with 31 carries for 186 yards and a touchdown. Toledo was a ground attack, while Buffalo held the strong air attack making for an exciting game no matter what you wanted to see and some high scoring as well. 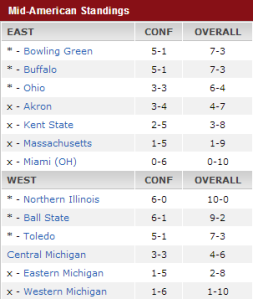 Game to Watch: Northern Illinois at Toledo. Toledo just had a big victory over a team that was undefeated in MAC play. Now they bring the best team in the MAC in to their home and with a victory would tie for first in the MAC West. At 7-3, they aren’t like Northern Illinois with their 16-ranked team at 10-0. Neither team has a particularly strong defense, but are aggressive offensively and could make for a high scoring affair. The only downside to this is that it’s a Wednesday night game, but at least it’s on national television. I know, that doesn’t really make it better. Let’s just look forward to seeing Jordan Lynch continue his great season.