I can’t decide which I like better: Skyline Chili or the actual Cincinnati skyline. Photo from ikron.org

Editor’s note: this is the first post in a series titled “Back Home,” in which Speakeasy writers analyze  fondness or distaste for their hometowns while there for winter break.

This isn’t going to be a Buzzfeed type of article listing 23 1/2 reasons why Cincinnati is the best city on the planet and you should never live anywhere else, ESPECIALLY not Pittsburgh or Cleveland, for the love of God. Instead, I will simply explain my love for the city.

Technically, I’m from Cincinnati. I was born there. But I’ve lived in Dayton, Columbus and Cleveland, too. I was a sophomore in high school when my family returned to Cincinnati, and I’ve been there for six years, in between semesters in Athens, of course. Maybe it was because most of my family lives in Cincinnati, or because I already had three moves under my belt, but the move back was better than expected.

For starters, I never felt out of place, even during the rocky transition to a new high school. Sure, it was awkward (probably more awkward than I care to admit; lookin’ at you, softball uniform), but I always felt like I belonged there. I definitely missed my old home and friends in Twinsburg, Ohio, but it was good to live somewhere where I didn’t have to drive four hours to see my grandparents.

Perhaps it’s the sense of community that made me so fond of Cincinnati. Then again, maybe it’s the food. 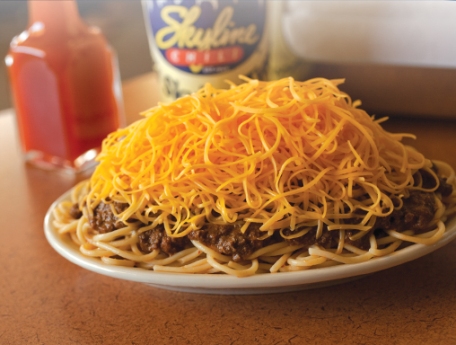 Don’t knock it ’til you try it: a 3-Way from Skyline Chili. Yep, that’s right, a 3-Way. Spaghetti, chili and cheese all in one. Photo from skylinechili.com

Cincinnati is famous for its Skyline Chili, so I won’t waste your time or my words explaining the phenomenon that is Cincy-style chili piled high on top of spaghetti and loaded with cheese, onions, beans, oyster crackers and hot sauce. Skyline is definitely a staple of Cincinnati, but there are so many more good eats around town, like Montgomery Inn, where you can get the best ribs this side of the Mississippi (or north of the Ohio).

An interesting tidbit about Cincinnati is that during the early 1800s it was the biggest pork-packing center in the country, earning the nickname Porkopolis. Okay, that’s not interesting. But what actually is interesting is pigs used to roam the streets of Cincinnati in herds because the city was the leading pork-packing center. Can you just take a second to imagine that, please? Herds of pigs roaming around downtown Cincinnati like they own the place. Clip-clopping around in their hooves, just trying not to be made into sausage or goetta.

Goetta (pronounced like musical-genius-slash-actual-plain-old-DJ David Guetta), a sausage-like breakfast food, is also native to Cincinnati and probably derives from the Porkopolis days. I’m telling you, the stuff is amazing, but most of it is made and distributed in Cincinnati. I could go on and on about the food of Cincinnati, but let me quickly go back to the sense of community.

On Sunday, the Cincinnati Bengals played the San Diego Chargers at home in the NFL playoffs. We won’t talk about the outcome of the game. For those who aren’t aware, NFL rules say that a home game cannot be televised locally unless the stadium sells out its tickets. On Thursday morning, about 7,200 tickets were left to sell out Paul Brown Stadium, which holds just over 65,000. By Friday afternoon, Cincinnati companies like Kroger and Proctor & Gamble bought the rest of those tickets. Not only would the game be televised, but the tickets would be given away to military veterans and active duty members.

Paul Brown Stadium during Sunday’s sold out Bengals game, thanks to Cincinnati companies like Kroger and Proctor & Gamble. Photo by Libby Birk

It wasn’t just the big companies that helped out, either. Jeff Ruby, the owner of several restaurants in Cincinnati, bought 100 tickets to donate to the Armed Forces Ticket Association Cincinnati before Kroger and P&G even made a move.

3 thoughts on “Back Home: Love for Cincinnati”