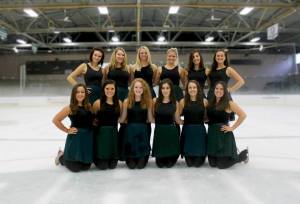 This week, Speakeasy talks with Talli Topp; coach and skater:

Speakeasy Sports: Can you briefly explain what synchronized skating is?

Talli Topp:  Synchro is a group of 8-16 girls or guys, in our case 12 girls, who skate a program mostly connected and completely in sync.  It takes elements from both freestyle and moves in the field and combines them with … most people describe it as like, synchronized swimming on ice, like it’s the same type of thing where you have to keep your feet together but you’re doing freestyle and moves in the field elements.

SS: Since there are divisions, because you wouldn’t expect a 4 year old in the same group as an 18 year old, are there different requirements for each level?

TT: We are allowed to have those post secondary students. We are allowed to have students from Hocking, we can have grad students. We don’t have any level requirements other than you’ve passed one, but a collegiate level, they all have to attend that school and usually, they have to have passed a certain level.  They are a competitive team in that next weekend, when we go to Sectionals, we just compete and that’s it, but when they go they compete and if they get in the top three or four, they can move on to Nationals and onto Worlds.  They are a qualifying division.

This past weekend, OUSST travelled to Fraser, Michigan and placed third!

SS: When did synchro come to Ohio?

TT: I know there was a team before us and they left for some unknown reason. The team just dissolved and we didn’t have a team for about six years.  But, about six years ago, a bunch of girls that were all freestylers and all friends and saw each other all the time, a few of them had done synchro before, and they were like, “We should start a team,” and they got all these girls together and they were small at first and inexperienced and self-coached and over 6 years, it’s grown and we’ve become much more competitive.

SS: Could you talk a little bit about the theme of a program and why there needs to be a theme?

TT: The theme is important because it helps the judges and the audience connect to and remember the program.  Our theme this year is nightmare/dark.  The music is from the movie Inception, and it is very intense which is quite a bit different than most teams in our division this year.

SS: What is is like being both the coach and a skater?

TT: Being both a skater and the coach is an added challenge, but there is also an added excitement and sense of joy and pride when we skate well and/or place well at a competition.

Last year, OUSST was named club sport of the year.  You can follow OUSST on their blog or on their twitter account.  If you want to see them perform, come out to the OU Hockey game this Friday, January 17th, and see them in between the first and second period of the game.  The puck drops at 7:30, doors open at 6:45 and tickets are $5 for a child, an $7 for an adult.

One thought on “The Sportlight: Synchronized skating”