Lots of shade thrown about these guys at the 2014 Grammys. Photo from Rolling Stone.

Sunday night, hip-hop was in outrage on Twitter. And while you were sitting peacefully watching TV and procrastinating on homework, “real” rap fans reached their limit.

Yesterday brought us another year of “Music’s Biggest Night” in the Grammy Awards, an annual award show that in the past has been seen as a credible source to honor the year’s best. Among many great performances, Macklemore and Ryan Lewis gave a beautiful performance featuring 33 couples of different ages, races, and orientations being married by Queen Latifah, who apparently is an ordained wedding officiate.

The performance for “Same Love,” a single discussing the rapper’s pro marriage equality stance and homophobia in hip-hop, also featured the original artist that inspired the song, Mary Lambert. Madonna, for reasons yet known, also performed with them. 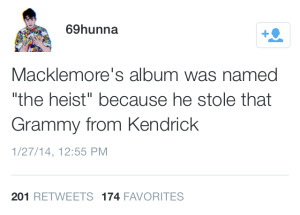 Macklemore and Ryan Lewis first gained mainstream attention after the video for “Thrift Shop” went viral, and they later released continuous hits with singles like “Can’t Hold Us” and “Same Love.” All of these singles were found on 2012’s “The Heist,” an interesting and diverse rap album that received generally favorable reviews from critics.

Due to its daring social commentary, it gained much media attention and popularity, as well as snubs from the Grammys rap committee. The selection committee tried to keep the duo from any rap related nominations and placed them in pop categories instead, but were ultimately overruled by the general committee.

Addressing the “Best Rap Album” category, Macklemore himself commented that the honor should go to Kendrick Lamar. But “Best Rap Album,” “Best Rap Performance,” and “Best Rap Song” were all awarded to Macklemore and Ryan Lewis. Hip-hop fans on social media saw this as a slap in the face. Though the two made a powerful stance on a much buzzed about social issue, the critical and public acclaims of “Yeezus” and more so “good kid, m.A.A.d city” made them obvious wins.

The loss was all hip-hop fans could take. Despite controversy, the album was in great company, with critically acclaimed albums like Drake’s “Nothing Was The Same,” Kanye West’s “Yeezus,” and Kendrick Lamar’s “good kid, m.A.A.d city.” Kanye West’s release earned rave reviews from music critics and publications such as Spin, Complex, The A.V. Club and TIME, who saw the album as the best of 2013.

Kendrick Lamar’s release was met with similarly universal acclaim and made year’s best lists in 2012 from both mainstream critics and the hip-hop community, many of whom called it a “classic,” setting Lamar in the forefront of a new generation of extremely talented lyricists.

Macklemore apologized to Kendrick Lamar in a text because he is SUCH a good friend. Photo from Instagram.

With all of the media attention, critical acclaim and year-end lists, you would think the category would be aired during the actual ceremony. It’s not.

The first time a rap award was presented was during the 31st year of the ceremony to The Fresh Prince (a.k.a. Will Smith) and DJ Jazzy Jeff for “Parents Just Don’t Understand,” but it has yet to be televised.

The only rap related category that you can see presented during the live show is “Best Rap/Sung Collaboration,” awarded to the same artist who won last year, Jay-Z, for his “Holy Grail” collaboration with the incomparable Justin Timberlake. Jay-Z’s album “Magna Carta…Holy Grail” was a huge commercial success, and was nominated for the rap album category as well.

When you consider the commercial success of all the nominated albums, you may see why certain albums get nominated and why certain albums win. The Grammys claim to make award decisions based on “artistic achievement, technical proficiency and overall excellence in the recording industry, without regard to album sales or chart position.” But to some, the Grammys have grown into a ceremony that hand out awards based far too much on popularity than “excellence.”

Many rap fans haven’t agreed with the Grammys’ rap related decisions since Kanye West’s Album of the Year snub in 2010 for “My Beautiful Dark Twisted Fantasy.” Fans of rap, among many genres, have come to the conclusion that they should no longer watch the ceremony anymore, even if Sir Paul McCartney is performing. It’s just not worth it anymore.

Did you throw some shade over the Grammy wins last night? Tweet at us @Speakeasymag!

One thought on “The Grammys pull a “Heist” on rap fans”