It’s a new semester for college students: new schedule, new classes, new majors (for some) and several new additions to the Bobcat family. Upon the beginning few weeks of Spring semester, several returning students are in the residence halls are already getting to know new arrivals to Ohio University. Whether they’re transfers from other schools or freshmen starting college, the opportunities to make new friends and help transfers adjust to Bobcat life are boundless.

Senior Brandy Borders was once a transfer student herself. Borders has spent the majority of her college career as an OU student, transferring here as a sophomore after spending her freshman year at Miami University (OU’s rival school, coincidentally). Many would agree that Borders made the right choice, and so would she.

“I just felt like Miami wasn’t for me,” said Borders.

She considers herself a country girl at heart, finding Athens’ small-town feel inviting. Borders majors in Communication Sciences and Disorders (CSD), so when she discovered OU’s illustrious Communications College, the decision to transfer became all the more appealing. Despite her choice to transfer to OU, Borders recalls the good times she had at Miami with the friends she made. Borders involvement in several clubs and organizations helped aid her in her transition here. She’s a part of Creative Expressions, a student organization that works with children with developmental disabilities and the arts at local community schools, the CSD Undergrad Research Club and Cru on campus.

Borders has certainly had time to adjust to her life in Athens, but what about students joining OU this semester? 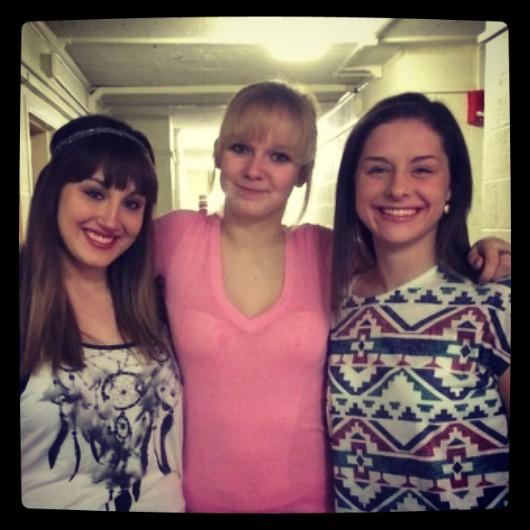 Pelligrini went on to explain that life on campus here is livelier than BGSU. “The vibe on campus was different,” Pelligrini said.

Pelligrini was fortunate to have her sister at Bowling Green, which made it easy for her to adjust there, but the school itself just wasn’t for her. She describes OU as being “more outgoing” than BGSU.  “Everyone is excited to be here.”

Sadly, not everyone sticks around in Athens for the entirety of their college careers. Just like the transfers whose previous college experiences prompted them to switch to the “Harvard on the Hocking,” the students who left OU have their reasons as well. Perhaps OU wasn’t their first choice and they were finally accepted into their dream school, or they couldn’t afford another semester’s tuition, or maybe they just wanted to be closer (or farther) from home.

Alex Lumley (left) and Michael Callahan (right) were best friends from high school and roommates during their first semester at OU. They were also in the same learning community. Photo courtesy of Michael Callahan.

It might be hard for some Bobcats to imagine anyone transferring, let alone to a rival school, but one freshman did exactly this. Michael Callahan was majoring in Screenwriting and Producing during his first semester at OU. “After learning more about production through a job I had the previous summer and talking with professionals in the business, I learned that production was not for me,” Callahan said.

He decided to pursue his second passion in technology and business, and transferred to Miami University for Spring semester. While some may scowl at the idea of transferring to Miami, it seems that Callahan’s decision was a necessary one. Callahan enjoyed his time at OU, making many memories through his learning community on West Green. “I remember sledding outside on trash bags with my friends from the LC. It was awesome,” he said.  While he misses his Bobcat family, he said he’s enjoying his time on enemy territory.

Over winter break, freshman Trevor Muir had to make the difficult decision to move out of his mod on South Green for good. Muir was an Anthropology major at OU, a field of study he found incredibly interesting and enjoyable. Besides schoolwork, Muir was head over heels in love with OU and made countless memories. “I felt like I lived the actual true college experience between all the parties, work and friends I made,” said Muir. He went on to explain how he made some of his closest friends in his mod in Ewing. “Every day they would wait for me to get out of class at 6:00 p.m. and we would go to what we called ‘family dinner.’ They would always wait on me, and if I was even five minutes late there was always a worried text asking where I was.” Many of his fondest memories were created in the hookah circle outside of South Green with his mod-mates, an activity that always doubled in size by the end.

Muir loved his semester here at OU, but due to finances he transferred to his hometown’s community college this semester to save money so he could return to OU in the fall. The hardest part was breaking the news to his mod-mates. Muir went the entire winter break without telling a soul from his mod that he left and came down to visit right before classes started.

“I came up to Athens and visited all my modmates. We had one last family dinner, one last cig on the stoop and then I had to break the news to them. It was devastating.” With only a 45 minute drive from his home in Marietta to Athens, visiting on the weekends will be relatively easy, but the distance is still significant compared to the mere footsteps between each other’s rooms.