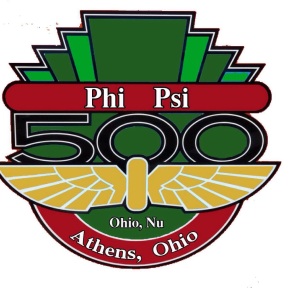 Phi Kappa Psi has set a tremendous goal for the week of March 17: the fraternity aims to earn 500 community hours in one week. Their first annual Phi Psi 500 is a week of community service events hosted by the fraternity in their attempt to reach its goal.  As of 5 p.m. on Thursday, the brothers had earned approximately 400 service hours. With the very appropriate motto, “The great joy of serving others,” the Phi Psi brothers intend to donate all proceeds to the Athens School District.

To kick off the Phi Psi 500 on Monday, the fraternity partook in a telethon. All the brothers phoned a minimum of three family members or friends back home in an attempt to raise money. Sophomore member Taylor Graf said the telethon raised an outstanding $2500.

Tuesday the brothers hosted a dunk tank in their front yard from 2-6 p.m. $2 paid for three attempts to dunk a member of the fraternity. Freshman member Harris Kaserman took the cold plunge into the dunk tank. “The water was very cold but anything for the kids. We do it for the kids,” Kaserman said.

Thursday from 6-10 p.m., the fraternity hosted a Phi Psi rodeo night in which they provided a mechanical bull, freebies, food and drinks for anyone who signed a waiver and paid $5 for entrance into their back yard. Halle Hrach left the rodeo with the champion time of 41 seconds and a prize of $25.

A courageous rider attempts to take the bull by the horns.
Photo taken by Tristen Phipps.

Friday beginning at 6:15 p.m. in Baker 242, Phi Kappa Psi will be hosting a date auction. There is no cost to attend. Brothers will go up for auction and will be “sold” to the highest bidder for a night out on the town with the oh-so-eligible brothers of Phi Kappa Psi.

A group of Phi Kappa Psi brothers proudly pose for a photo in front of their house.
Photo taken by Tristen Phipps.

The Phi Psi 500 is well on track to reach their goal of 500 hours and has raised a substantial amount of money for the Athens school district. Kaserman said the events of the week are “so far so good” and have exceeded their expectations.

“It’s been very successful, we look forward to do it through many years to come,” Graf said.

The Phi Psi brothers are very enthusiastic about the work they do, “anything for the kids.”