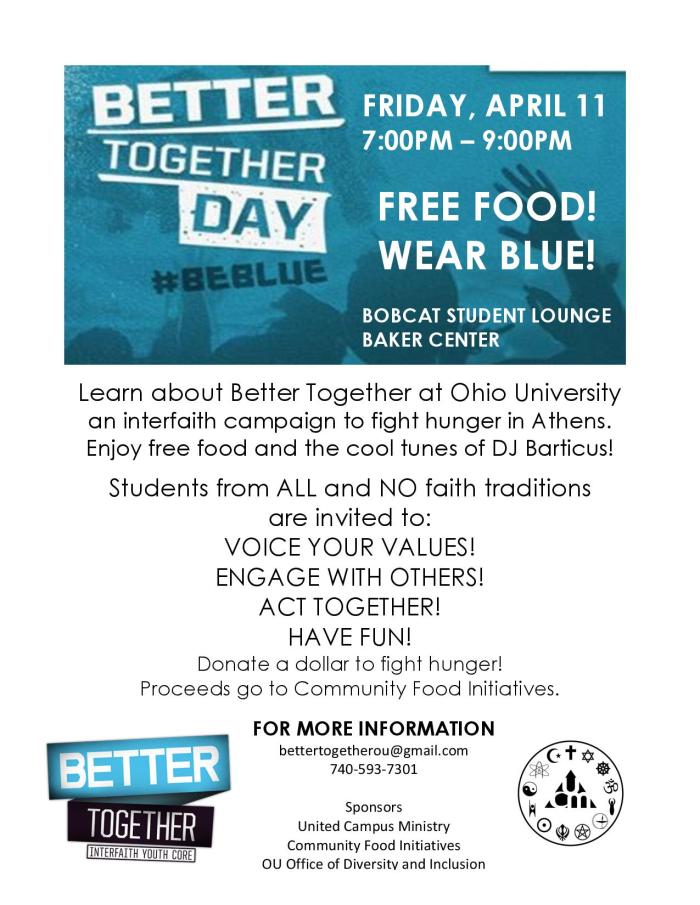 Throughout history and even in today’s world, people’s fundamental beliefs often clash with others’, perpetuating a disharmony of relations. Humans become so absorbed in their own individualistic opinions and goals that they forget about humanity as a whole.

Ohio University is no exception to this reality. The campus is home to tens of thousands of students with diverse cultural backgrounds and various personal beliefs, and oftentimes ignorance of peoples’ values disrupts the Bobcat family. 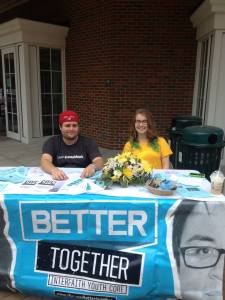 Fortunately, there is an OU group that aims to challenge this disharmony and unite people of various religious and moral beliefs for a greater purpose. Better Together is a campaign conducted through the Interfaith Youth Core, an organization whose mission is to connect people with different beliefs through a relatable, greater cause. Colleges across the nation, including OU, have IFYC chapters that choose different causes usually connected to a local issue.

Considering that Athens is Ohio’s most impoverished county, OU’s chapter has chosen to fight hunger.

“We focus on creating an interfaith dialogue through establishing food security for Athens,” said Krista Mobley, a senior majoring in Global Studies with a focus on War and Peace. Mobley also works as Co-President of the OU organization STAND Against Genocide and her internship through the United Campus Ministry (UCM).

“We’re all about inclusivity. A lot of people who aren’t part of a religion are confused as to what Better Together is about,” Mobley said. “We include everyone regardless of whether they believe in something or not.”

Better Together meets on Tuesdays at 6 p.m. in the UCM lounge at 18 North College St.

The campaign hosted the Interfaith Peace Walk last semester that marched through the streets of Athens to deliver a message of acceptance and cooperation between people of various backgrounds and beliefs. At the end of this week, the organization is hosting their final event, Better Together Day, to celebrate the organization’s accomplishments of fundraising for the community and to further engage participants in their message of an interfaith dialogue. It will be the second largest Better Together Day and the campaign’s third year at OU. 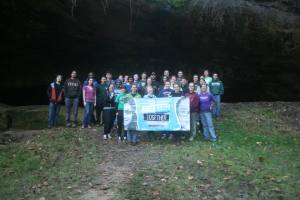 The Better Together group during their Watershed Cleanup project. Photo by Krista Mobley.

The campaign has raised $500 throughout the past school year and will also offer donation opportunities at the event. The funds the group raised has gone to the Community Food Initiatives (CFI), an organization that offers easier access to healthy foods for Athens residents and also provides workshops for locals to learn how to grow their own produce.

The event will feature the area’s different faith communities, including groups such as Hillel, the Muslim Student Association, Christ Lutheran Church and STAND, who will represent their messages and what they are doing in the community, Mobley said. The event will also have local food options, a DJ and speakers CFI Executive Director Mary Nally and OU’s Vice Provost for Diversity and Inclusion Dr. Shari Clarke.

The event lasts from 7:00 to 9:00 p.m. on Friday in the Bobcat Student Lounge in Baker Center. Anyone who is interested in coming together with people from different backgrounds and beliefs and promoting an interfaith dialogue for a better cause is welcome to attend. Those who decide to go are encouraged to wear blue and use social media to promote the event by tagging #BEBLUE in any posts.

For more information about Better Together, contact the group at 740-593-7301 or bettertogetherou@gmail.com.