Smith House is home to Gender Neutral Housing, which houses about 25 students – half the amount of students since its debut in 2011. Photo by Tristen Phipps

Gender neutral housing (GNH) was introduced to Ohio University in the fall of 2011. Since its debut, the specialized housing has been cut in half.

GNH was developed to provide a living space where two students regardless of sex, sexual orientation, gender or gender expression can live in the same room.

Initially GNH could accommodate 50 students. In the fall, the size was cut in half, allegedly due to the large size of the incoming freshman class and lack of full capacity of gender neutral students. Located on South Green, aka “Dirty South,” in Smith House, GNH now occupies only half of the third floor.

Smith House is located in one of the farthest south buildings on South Green.  The location is relatively secluded from campus academic buildings.

Delfin Bautista, director of the LGBT Center, sees the issue of such an isolated location. “To put a group of people who are marginalized in society in a marginalized space is sort of a double whammy,” Delfin said.

Amanda Hobson is residential coordinator of Smith House. She said the building’s mod-style arrangement was the most appropriate fit for the students.

“The area in which GNH is housed was chosen based on student input and the types of spaces students wanted to live in,” she said.

As renovations spread to South Green, the question arises: Where will GNH move? As of right now the question remains as no determinations have been made regarding GNH and its place on the Master Housing Plan.

“GNH will continue, as both the institution and the department have committed to this endeavor, but the final plans for its locations have not been made,” Hobson said.

The pending location of GNH with renovations in motion may rely on numbers. In years past, demand for GNH has been low.

Bautista indicates that numbers have been the biggest problem for GNH. The lack of numbers may stem from lack of advertisement.

“It wasn’t really widely advertised. It definitely took some seeking out,” said LGBT member, junior Kallen Justice. “I had to dig, and I think that’s a big problem. You can’t sign up for something that you don’t know about.”

Kallen lived in GNH her sophomore year. “It was really pleasant. It was really nice to be surrounded by people who understood gender is more than just a binary,” she said.

Kallen expressed that there was a stronger sense of community in GNH in comparison to coed dorms. “We weren’t necessarily the same people, but we all had that same understanding.”

“I would hope it’s something the university readily puts forward, especially for freshman,” Beckholt said. 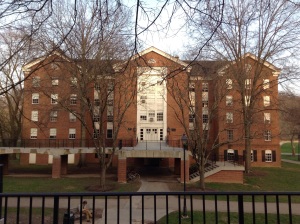 Bautista hopes the university sees the value in the specialized housing. “It’s benefited many different groups, although the intention was to support trans and gender-variant folk, some of the impact has been outside of that community.”

Ohio University is one of only 55 universities nationwide to offer gender neutral housing.

“I think it’s an indication that the university is practicing what it preaches,” Bautista said. “The university in its mission statement and its values talks a lot about community and supporting diversity and inclusivity – well here is a physical manifestation of that commitment.”