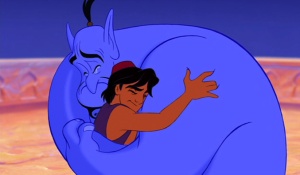 Our freedom can come from admitting that we are not free. (Photo from Disney’s Aladdin)

If you or someone you know is having suicidal thoughts, please contact the National Suicide Prevention Helpline at 1-800-273-8255.

It’s only when things like the recent death of Robin Williams happen that we start to examine suicide and the causes behind it. We start to care about these things when our favorite stars show that they too, are prone— that they are not invincible. And it shows that none of us are.

I have never been more terrified to write something in my life, nor to click on that taunting button that urges me to share my story with the world. I don’t seek sympathy. I don’t seek attention. I only seek to share my story so someone else may feel compelled to do the same. And I hope that the stories that we share will encourage others to talk about the real things. And to help those in pain. And finally, I hope that we will see mental illness in a new way when we realize that so many of our friends and loved ones are among those who desperately cling to hold on. We are not weak. We are not “broken.” We simply fight to find balance in the imbalance.

We want to know why one of the most celebrated comedians of our time could possibly have done something as tragic as take his life. It’s not hard to see that an illness caused his death—a stigmatized illness that too many pretend isn’t a real problem. Depression is real and it’s dangerous. Even here on this campus, countless students will experience its devastating wrath, but in order to appear “normal” and not seem “weak,” they hide. And oftentimes, they overcompensate and appear to be the happiest people we know. Sometimes they don’t. Sometimes the signs are so blatantly obvious that we avoid them altogether in order to pretend it’s not there.

I understand why Williams did it, though. That doesn’t mean that I support it, but I can understand the thought process that many don’t realize exists in cases like this. Although suicide is never an answer, depression sucks away all hope, making it impossible to see that there are still so many great things ahead. If you’ve never felt like that, it’s an impossible thought to wrap your head around. It’s hard to see how anyone could miss the beauty around them—and within them. But I do understand what Williams did because I, too, have had my mind wander to relentless thoughts that had the potential to eventually become that decision.

This is my depression

For years I held my secret close, being careful to smile when appropriate and go through the motions of what was expected of me so no one would see what was hiding beneath the act. I think I was always depressed. Even as a child the signs were there. I just didn’t know what to call those feelings. I think it became more gripping as I got older. The summer before high school, I identified it. I was depressed.

The one thing I never really did understand though is when people said, “It’s a permanent solution to a temporary problem.” I don’t believe that at all. For some, maybe, yes, they will conquer it. I have, but I live in constant fear that it will come back. Yes, it is a permanent solution that under no circumstances should ever be utilized. I agree with that. But anyone with depression, or who has suffered from it in the past, would likely tell you that it’s not a temporary problem. Even if the feelings subside, the effects linger.

I remember how when my sister passed away, it was the first time in years I had a respite from those feelings, strangely enough. A sense of numbness took hold and blocked out any sort of emotion. And then, when the depression and sadness dreadfully returned with a vengeance, I felt a responsibility to live. I knew I couldn’t put my parents through losing a child ever again, especially to make that choice when my sister didn’t have one. I remember pleading to God that he take me and bring her back. After all, I was the one who wanted to die. She deserved to live. She was the sunny one—the outgoing one with friends everywhere. And I was just me—plain old blah me.

The nagging beast in my head reminded me of that every time I was down. There were times when the bad thoughts crept in. It’s heartbreaking now to look back at the hollowed-out girl I used to be. I was haunted by ideas of escape. Not freedom. Not happy. Not healthy. I longed to flee and escape this life entirely, knowing all along that it would nearly kill those who loved me. So I composed letters to a lengthy list of people I believed were owed explanations to tell them the things I loved about them and the great things I wanted them to see in themselves. Here I was, trying to stress to others what made them great when I felt that I was utterly useless. So useless, in fact, that it would be better if I just rid the world of the burden of my existence.

I could see the good in others, just not myself. I wanted to take the time to make sure that others never felt the way I did. That aches to look back on now.

The letters are still in a folder on my laptop titled “LR” for “Last Resort.” I never finished them and I told myself I couldn’t leave without completing them. Thankfully, I never did. They’re still there, but not because I’ll ever need them. I keep them to remind myself of my fight. Of my struggle. And mostly, of my success.

Those saying that Williams is a “coward” or was “taking the easy way out” is proof that society’s understanding of mental illness is fundamentally flawed. Don’t tell me that Williams wasn’t strong for years leading up to his death. You can’t tell me that he didn’t fight valiantly to ignore the thoughts he likely had so many times before that told him he should end it all. You don’t just think, “Hey, this sounds like a good idea.” You fight until the fight exhausts you. And I don’t know how we can stop it from getting to that point, but we can’t ignore depression.

I was scared to post this for many reasons. I was scared to post it because I’m revealing my deepest, most intimate emotions. I’m sharing them with the world in hope of giving others a glimpse of what it’s like to be in the mind of someone who’s depressed. For so long, I honestly believed that everyone felt empty all the time. I didn’t know what it meant to be truly happy and believed it to be impossible. I thought everyone thought the way I did. Many do, but they don’t share it. And beyond that, there are many people who really do feel happy. Like, I can actually see now how amazingly beautiful it is to have my baseline for any given day set at happy. I do have my bad days, even still. I cry for no reason. I’ve had people ask what’s wrong and though I desperately search for answers, all I can say is, “I don’t know.” And I mean that. I really don’t know sometimes. But I’m better. I’m fighting and I know so many others doing the same.

Depression isn’t a cold. It won’t just heal in a day or two. It’s not a choice. Who wants to feel like that? I have never known someone who willingly opted to feel miserable every moment of every day when they could “just be happy.” Sorry, but it just doesn’t work that way. You have no idea how many times I told myself, “Today, you’re going to start being happy and never look back.” I tried so hard to believe that I could do it. But that’s not possible. It always came back because that was a temporary solution to a permanent problem. I had to fight and let it happen organically when I wasn’t even looking, and even then, I know those feelings may someday return.

In the meantime, I fight to deter it. I fight for this freedom and happiness that I hope others who suffer from depression will one day see, because it is out there and it will come. Maybe I’ll always be afraid, but I also know the potential of happiness now and that makes all the difference. Now, I can have hope even when that evil demon tries to steal it away. I want to make sure everyone can feel that potential for hope too.

It’s hard to get to that point, but it’s worth every tear, scar and battle. Happiness is worth fighting the most brutal of wars. So, let’s create an army. Let’s fight back by talking and accepting the reality of depression.

For so long, I couldn’t see the benefit of talking about it. And while there are a lot of reasons why I survived, I know that admitting it and breaking free of my secret lifted a weight from my shoulders that I was no longer able to bear. Because of misconceptions and stigmas surrounding depression, I felt that I was unable to speak about it. How could I not fear the judgments that would surely come my way for admitting these secrets about my life—my mind?

But now, I’m going to do it. I’m writing it all down and I’m pushing “publish” because I’m done with that stigma. Depression is nothing to be ashamed of.

We must begin looking at mental illness through a new lens. We must stop treating those with depression like helpless victims. We must have an open conversation about these things. For Robin Williams, for that terrified girl I used to be, for the kids in the headlines and for our fellow Bobcats desperately guarding their secret, please for our sakes, let’s talk. I’m inviting you to join us in this conversation. I’m inviting you to share in the healing. And I’m asking us all to leave the shame and stigma of mental illness behind us. Our future will be so much brighter without it.

Let us find the balance in the imbalance.

One thought on “Giving a voice to silence: Let’s talk”