A single pastor and his trainee brought the word of Jesus Christ to Ohio University’s campus in a controversial manner on Thursday. With that message came screams of disapproval from Bobcats in front of Scripps Hall.

John and Jerry M. occupied the sidewalk for several hours. Both men held large signs and recited their beliefs through microphones. Initially, their speech offended several students who began to scream back at them. As the day proceeded, however, their speech began to fall deaf as the sound of Bobcats chanting and singing overpowered the opinion that our culture in Athens needed any saving.

Pastor Jerry M. and his colleague, John, asserted that they came to campus to preach the word of Jesus Christ.

Their preaching about the word of God wasn’t simply promoting the Bible and Christian values; it was condemning homosexuality and accrediting rape to women’s lack of clothing.

The two men traveled from central Ohio representing a non-denominational church near the Mt. Vernon area. The men refused to provide the name of their church, or their last names for fear of harassment.

Jerry M. is a pastor and a former Bobcat who has been spreading the word of God for the past 15 years.

Upon approaching Jerry M., he was involved in a conversation with students regarding nudity. Jerry M. stated that God clothed people with animal skins because fig leaves weren’t sufficient. Therefore, we also need to cover our bodies, especially women.

One student raised the question of whether or not Jerry M. was perpetuating rape culture by oppressing women and instructing them how to dress. Her question was interrupted with Jerry M.’s eager response: “Well, I’ll tell you what: if you follow the culture, you’d find out that women dressed modestly in our society many years ago. There was a lot less rapes than there are today.”

With which the female student (wearing a dress) replied, “So wearing what I’m wearing now…I’m asking for it?”

Jerry M. was quick to break it down for Bobcats: “It’s like taking a nice piece of meat and putting it in front of a hungry dog.” He then referred back to a prior conversation regarding appropriate swimwear, “So you don’t think wearing a little thin bikini is tempting to some of these guys here?”

A male student, holding a LGBT flag, responded that it would not be tempting to rape a woman in a “little thin bikini.” Jerry M. looked at the student and said, “Oh. it’s not? Oh, that’s right, you’re holding that flag, I forgot. Let me see if I can find somebody else.”

Another female student in jean shorts and a t-shirt asked Jerry M. if her outfit was modest. He responded, “No, it’s not modest. You shouldn’t reveal your legs like that.”

Then I asked what a modest outfit for me would be. Jerry replied, “Cover your body…from your neck down to your ankles.” As I showed my legs in my rugged jean shorts, I asked Jerry, in accordance with his theory, why I had not been raped by the male standing beside me, as I was tempting him with my legs.

Jerry M. responded, “He’s not raping you, but he may when he gets home in his mind. That happens all the time.”

The male student quickly rejected Jerry M.’s inference and said he had other things on his mind, and he would not go home and mentally rape anyone.

I then asked Jerry M. if he had ever raped someone in his mind. He responded, “Probably not raped…but I have thought of those things (sexual intimacy) in my mind.”

As their speech included homophobic ideals, a large crowd of the LGBT community, supporters and allies gathered around the men, attempting to chant and sing over their message.

Just recently, Jerry M. and John visited Columbus State. John remarked that a crowd was also present at Columbus State; at that campus, however, it wasn’t “so much the homosexuals as the Muslims,” that gathered in protest, he said.

John said they were not on our campus to protest, but simply to spread the word of Jesus by preaching against all sins.

“We preach against fornication, drunkenness, homosexuality, lying, stealing, and that all men need to find forgiveness in Jesus Christ for their sins,” John said.

When asked if he had personally ever sinned, John replied that he had, and that he had repented, was born again, and it has been forgiven.

Pastor Jerry M. looks at the crowd that has gathered behind him while holding a sign with a graphic reference to the September 11th terrorist attacks. Photo by Tristen Phipps

Bobcats attempt to cover pastor-in-training, John with a large banner as he displays a sign that reads, “God’s wrath. ‘He that believeth not shall be damned’ Mark 16:16” Photo by Tristen Phipps 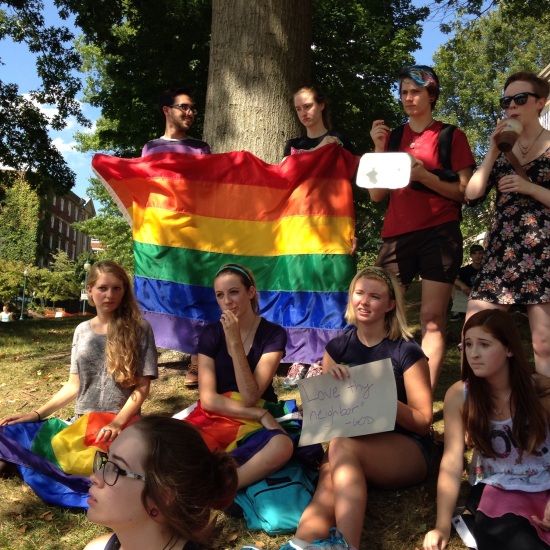 Bobcats look in amusement as pastor Jerry M. explains his position on women in society. Photo by Tristen Phipps

One thought on “Pastor attempts to ‘Bible brainwash’ Bobcats”