Protesters march on South College Street on Wednesday. Their route led them through uptown Athens, down University Terrace, and ended at Baker University Center. Photo courtesy of Evan Chwalek.

Hundreds of students gathered on College Green on Wednesday at precisely 12:01 p.m. to stand in solidarity with protesters of Ferguson and to protest recent social injustice. Students all over campus put their hands up and marched out of classes as a part of the #HandsUpWalkOut movement.

The rally began with an introduction from Olivia Wallace, a junior studying visual anthropology. After opening remarks, Wallace invited the crowd to participate in an African dance. The rally then reconvened with several speakers.

At approximately 1 p.m. the march began. Protesters marched down Court Street and continued on to East Washington Street and then to College Street. The march then proceeded up East Union Street, on to University Terrace and concluded at the top of Baker Center. 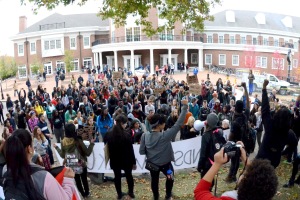 “I stood with a crowd weary with pain because they had been beaten and shackled and made to feel less than human for so long, but they were energized with solidarity. And I stood with my fellow students that dared to try to make a difference one step at a time as we dared to say that we are brave,” Taylor said as he reflected on his experience in Ferguson.

In opening remarks, Wallace provided students with a brief background on the shooting of Michael Brown.

Brown was shot and killed in the streets of Ferguson, Mo. on Aug. 9. Darren Wilson, the police officer who shot Brown will not be indicted until January 2015.

Athens community member and founder of Ugata, Lawrence Greene stated that he has experienced racism locally for simply trying to embrace his culture.

The crowd met Greene’s assertion in harmony with a roar of applause.

“Who are the real criminals here?” Taylor asked, referring to the criminalization of the black race by the media. Taylor urged the crowd to break free of the “tired image” of blacks. 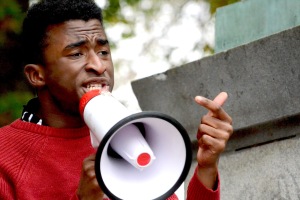 Taylor laid the blame at the feet of those who stood by as an entire race was oppressed. Taylor was adamant that the people must stand up, they must speak and they must fight for their human rights.

“When I think of the day that I can finally tell my kids, ‘Yes, we fought, and we won and we did not let them break us’…I think of this,” Taylor said.

As the energy grew, the crowd was confronted by the assertion that the issue was not only of race but an issue of class and humanity.

Sami Eddauod, a member of the Palestinian Solidarity Group, instructed those in attendance, “Regardless of the color of your fist, put it in the air.” With fists of all colors in the air, the crowd shouted as one, “All lives matter! All lives matter!”

The vigor of the movement continued as revolution was inspired.

Aramis Malachi-Ture Sundiata of the Ohio Student Association commanded attention as he recounted his participation in a protest of the shooting of John Crawford.

“I’m challenging my white comrades, my black comrades—everybody in here—to be able to go to your communities and discuss these issues,” said Sundiata. “Because if you don’t do this and organize for power, they will win.”

Watson urged for more uncomfortable conversations about racism to occur.

Scores of people fill College Green to hear the perspectives of various speakers prior to the protest march. OU student Jolana Watson speaks about the future of young black girls. Photo courtesy of Evan Chwalek.

For some, like Kelli Oliver, a senior studying commercial photography, the day Brown was shot was the day their world stood still.

Oliver stated that she found her relief in the image of the Ferguson protesters. Oliver recently visited Ferguson and stood where Brown was shot.

She marched nearly three miles to the Ferguson police department and stood in solidarity with the protesters.

“While I still have the ringing of the anguish in their voices in my ears, I don’t think the police department could hear us behind their riot gear,” said Oliver.

Oliver argued that the shooting of Brown is part of a larger issue. She stated that the death of Brown was a message sent to silence minorities.

Oliver regarded it as the moral duty of the privileged minority to stand beside the protesters in Ferguson.

“I will not wait until it is my brother or my sister or my father who is slain to stand up. By then it is far far too late. The time is now,” Oliver said.

OU student Jasmine-Renee Riley also protested in Ferguson and says the time to fight the fight is now.

Riley challenged those in attendance to understand what it means to achieve economic and social justice, to stop pointing fingers and to stand behind what they believe. Riley then recited the basic human rights of individuals, black or white, and was echoed in unison by all.

“This is our fight. So let’s fight it,” said Riley.

The unyielding power of the people was witnessed by hundreds of Bobcats on Wednesday and it won’t stop there. The fight for justice will continue in Bentley 120 at 8p.m. today, Oct. 23, at a follow up meeting to discuss the next steps.