This article was co-written by Lauren Flum and Natalie Colarossi.

The University of Missouri made national news Monday evening after University President Tim Wolfe and Chancellor R. Bowen Loftin announced their resignation in response to student protests regarding racial inaction on campus.

The triumph for student activists and protesters was short lived as minority students of the predominantly white campus received backlash. Social media threats toward students as well as on-campus threats have flooded the university.

In acknowledgment of this problem, Ohio University students gathered outside of the Scripps Amphitheater at 4:30 p.m. on Wednesday, Nov. 11, to rally and take a photo with the hashtag #OUStandsWithMizzou.

The rally was proposed by NAACP Freshman Representative and journalism student Jasmyn Pearl after she discovered the trending hashtag #Mizzou. “It was 11:30 p.m. when I felt the weight of the world on my chest. I felt the fear of uncertainty. I felt my confidence as a strong young woman escape my hands,” Pearl wrote in her blog upon her discovery of the hashtag.

“It was 12:35 a.m. when I noticed the bright clusters of stars peaking through the trees. It was time to act,” Pearl wrote. She reached out to the rest of the NAACP executive board, proposing the idea of an event on OU’s campus, and “they were immediately down for it,” said Pearl.

“I feel like a lot of people didn’t know the backstory,” Apparicio said. “I feel like they just saw the Yik Yak posts, and just took it off from there, which is fine, you should be angry about that, but you should also understand that it wasn’t just an isolated incident. [Mizzou’s] racial tensions have been building on the campus for weeks on end and they were being ignored by the administration.” 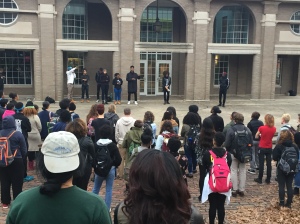 NAACP Executive Board leads discussion on the events at Mizzou as well as racism on college campus. Photo by Natalie Colarossi.

During the rally, students had the opportunity to speak out about campus racism and address the issues and changes they wish to accomplish.

To help solve these issues, many students spoke about cultural education, activism and the importance of having an open discussion.

“There have been issues with racism and sexism towards women of color on this campus in the past on every sort of social media that you can find, and the university has been completely silent about it…” Holbrook said. “This is an issue that impacts tons of students nationally and impacts their education at this university specifically and no one has said a word.”

With civil rights rallies circulating around college campuses nationwide, Pearl expressed what sort of impact she hopes this photo and accompanying rally created.

“Hopefully we can show each other and Mizzou students that ‘hey we see you, we care about you, and we support you,” Pearl said.