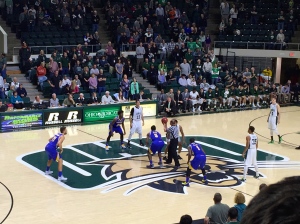 Ohio wrapped up non-conference play with a 81-56 victory over UC-Riverside.
(Photo by Corbin Bagford)

Treg Setty scored a season-high 20 points and pulled down 10 rebounds to lead Ohio to a 81-59 victory over UC-Riverside (9-6) on Wednesday night. The win extends the Bobcats’ win streak to five games and wraps up the team’s non-conference slate.

“The shots were falling,” Setty said. “Tonight my number was called and I came through for the team. We got the win, and that’s the most important thing.”

Setty scored Ohio’s first six points of the contest and matched a career-high point total that he last tallied as a freshman at Southern Illinois.

Ohio opened the second half on a 23-4 run and led by 18 or more for the remainder of the game.

Tony Campbell fell one rebound short of making it five consecutive double-doubles with 15 points and nine rebounds. Jaaron Simmons finished with 15 points, eight assists and four rebounds. Thirteen of Simmons’ 15 points came in the second half.

“I like to focus on getting everyone else involved first,” Simmons said. “At halftime, Coach told me to go out there and be aggressive.”

The ‘Cats outrebounded the Highlanders 44-27 and never trailed. Ohio tied a season-high with nine steals in the victory.

Jaylen Bland led UC-Riverside with 15 points, 12 of which came in the first half. Menno Dijkstra added 10 points and six rebounds.

“On this team we have a lot of weapons that haven’t showed up,” Setty says. “As the season goes on, we’ll have a lot of tools in our toolbox.”

The ‘Cats didn’t need to use many of those tools in the win. Saul Phillips says it was his team’s best performance of the season.

“They’re better than a lot of the teams we’ve played and we made them look not so,” Phillips said. “I’m not ready to parade down Court Street with confetti flying yet, but I am excited to start conference play.”