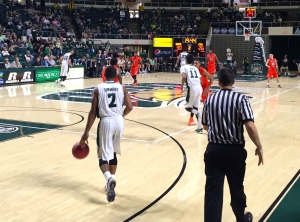 Jaaron Simmons brings the ball up the court in Ohio’s 73-57 exhibition victory over Indiana Tech. He scored 24 points to lead Ohio to a win on Saturday afternoon. (Photo by Corbin Bagford)

The crowd was quiet, panicking. The Ohio offensive feast in the first half turned to famine in the second and Northern Illinois had recovered from a 18-point deficit to reclaim the lead.

Then Jaaron Simmons took over.

With his team down one and four minutes remaining, Simmons shouldered the load, scoring or assisting on all but one of Ohio’s final 16 points, and led the Bobcats to a 80-69 home victory over the Huskies.

“I just didn’t want to lose,” Simmons said. “Whether I was passing to an open teammate, getting a bucket or getting to the line. I had to do it.”

Simmons recorded a double-double of 24 points and 12 assists, his fourth of the season.

“He just had that look in his eye like ‘We’re not losing today,'” Ohio coach Saul Phillips. “He’s the quintessential leader. If you’re in a tough spot, you want Jaaron on you side.”

“It seemed like we were still at the Ohio (University) Inn,” Northern Illinois coach Mark Montgomery said. “And Ohio was playing good basketball.”

The Huskies responded by opening the second half on a 21-4 run. Phillips says Ohio’s streaky play is a byproduct of the system it runs.

“Our style of play is susceptible to runs,” Phillips said. “If you have any history of heart issues, you might want to take a game off.”

The Convocation Center was far from filled, but the Sibs’ Weekend crowd of 8,773 was great according to Phillips.

“It almost makes it worth blowing an 18-point lead to keep ’em in the game,” he said. “If we can get that going, nobody in the MAC has that. Nobody.”

The win concludes Ohio’s homestand. The Green & White will travel to Muncie, Indiana on Tuesday to take on Ball State (15-8, 6-4 MAC). The Cardinals share the top spot in the MAC West with Central Michigan.

One thought on “Men’s Basketball: Simmons leads ‘Cats to W”