For the last two years, the non-profit LA-based group Girls Behind The Rock Show (GBTRS) has been dedicated to the empowerment of young women in the music industry. Through focusing on the creation of safe, healthy, and non-hostile work environments for young women, GBTRS has created a platform for young musicians who want to pursue a career in the male-dominated field.

Founder, Shelby Chargin has created an inspiring organization to not only motivate women in the music industry but has successfully formed a powerful message that girls will not back down.

Inspired by her own experiences while trying to integrate herself into the music industry, Chargin became aware of the challenges and controversial issues that arose throughout this field.

“Getting into music was a really difficult time as I felt I was navigating my personal reputation against my professional capabilities because I was a girl. All the gross and negative comments or the bosses I had who would tell me to ‘learn to take a joke’ just got completely uncontrollable,” said Chargin. 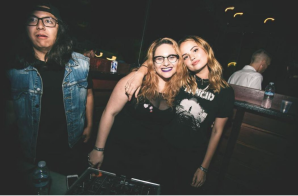 At this moment, Chargin took action to create an environment where women would be given both equal and valuable opportunities that will provide experience for their careers.

Girls Behind The Rock Show provides both mentorship and internship opportunities in the various aspects of the music industry like touring, production and management.

“We honestly provide any opportunities that come our way. In the past we’ve worked with festivals and individuals and almost every girl who has been connecting through us has gone on to do pretty great things in music, just at the beginning of their careers,” said Chargin.

This goes to show that GBTRS is able to not only assists young women in finding their niche in the music industry, but also provides them with the tools for success in their future endeavors.

Though Chagrin does incredible work, she doesn’t run the show all by herself. GBTRS has a team of talented women that help keep everything running smoothly and in order and contribute ideas and make visions come to life. 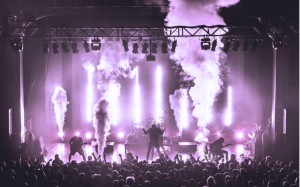 “My actual angels Jess George who is my right brain. I’m very all over the place in planning and plotting and she keeps me on track as I spew out ideas, have meetings and start programs. Callie Burnett who is honestly the most outspoken out of all of us. She’s constantly reminding me of what it means to be brave. My two graphic designers are Allison Thompson and Paula Arajo and they are actual angels sent from heaven. Madeline Cronin is easily the most self-made out of all of us. One day she’ll just pop up and be like ‘Hey all! I’m doing this thing’, and I love watching her constantly succeed.

“And finally my girl Linda Kraska who is my in and out person. I love working with Lindy because I can call on her to be a bit of a jack of all trades when I need it” said Chargin.

In 2017, GBTRS partnered with SWMRS for their “Roadie for a Day” promotion. Women were encouraged to submit applications and whoever was selected got to become a member of the SWMRS crew for one of their shows. The selected applicant was given the chance to learn how an event is run from start to finish and was able to receive a first hand account of what must happen backstage for the show to actually go on.

Everyday at GBTRS, something great is bound to happen. Whether it be working with bands like SWMRS or talking to young stars just venturing out into the music/entertainment industry, the GBTRS team is able to see success occur right before their eyes, raise awareness for women, and make connections for change with big names.

“I’ve been able to connect with some of the biggest managers and labels in the game because they WANT to see the change begin to happen. I can’t disclose too much info about 2018, but it’s looking to be a big year in our world and we’re really excited to see artists paying attention,”said Chargin. 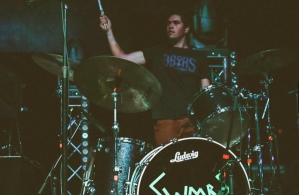 GBTRS has connections all over. Working closely with Girls Against from the UK and having a Facebook page with 2,600+ professional women in the music industry that range from Rolling Stone employees or those who are just getting their start in the profession as interns. This goes to show that the unification between women in the music industry is just about everywhere.

Shelby Chargin created the brave and courageous movement that proves women are going to continue to follow through with their passions and take any industry by storm. Chargin stresses the importance of never backing down and to never let anyone underestimate who you are and what you are capable of.

“Don’t be afraid to be yourself, to raise hell or to have an opinion. You are valuable and you earned your right to whatever job you have right now, don’t let anyone take that confidence from you”