Today may have left a few of you upset that you no longer get an extra day of sleep to observe Columbus day. However, a brief history of Ohio University closings revealed that few circumstances allow for breaks from class. In recent history, Jan. 31, 2019, marked another day that disgruntled Ohio University students had to get out of their warm beds and go to class. Yet, the day had students especially upset.

Jan. 30, and Jan. 31, were some of the coldest days of the year in Ohio. In Athens, Jan. 30, went as low as -4 degrees Fahrenheit while Jan. 31, went as low as -6 degrees Fahrenheit. Colleges such as Ohio State University, the University of Toledo, and the University of Akron all closed for both days.Ohio University, on the other hand, was open Jan. 31. Under Ohio law, only level three snow emergencies will limit the roads to emergency vehicles. But other interesting university closings could potentially offer hope to class-free daydreams.

A portrait of William Holmes McGuffey from ohiohistroycentral.org

In 1843 Ohio University shutdown due to a ‘financial crisis’ that came as a result of legislation. The Ohio State Legislature had just passed a law preventing Ohio University from revaluing land based on any improvements made to the land. Land was a massive income booster for the university during this period. According to Dr. Robert L. Williams II’s A Bulleted/Pictorial History of Ohio University, “OU’s income following this was one-tenth what it could have been” (Williams 8).  Staff cuts ensued and the amount of students attending the suffered severely. President William Holmes McGuffey resigned in 1843 likely in relation to this drop in finances. With no financial support, Ohio University closed in 1843 all the way until 1848.

A picture of flooding in 1963 from the Ohio Alumnus.

Back before 1970, there was a different weather experience the Athens Community had to deal with other than snowstorms. Expansion was constantly happening with the University, but the Hocking River remained in the same place and overflowed, a lot. The Ohio Alumnus reported the 1963 flood had been the ninth flood in ten years. Plans to reroute the water had been either delayed by financial concerns or lack of action by the Presidents. President Alden was the one who took on the project and helped reroute the river. 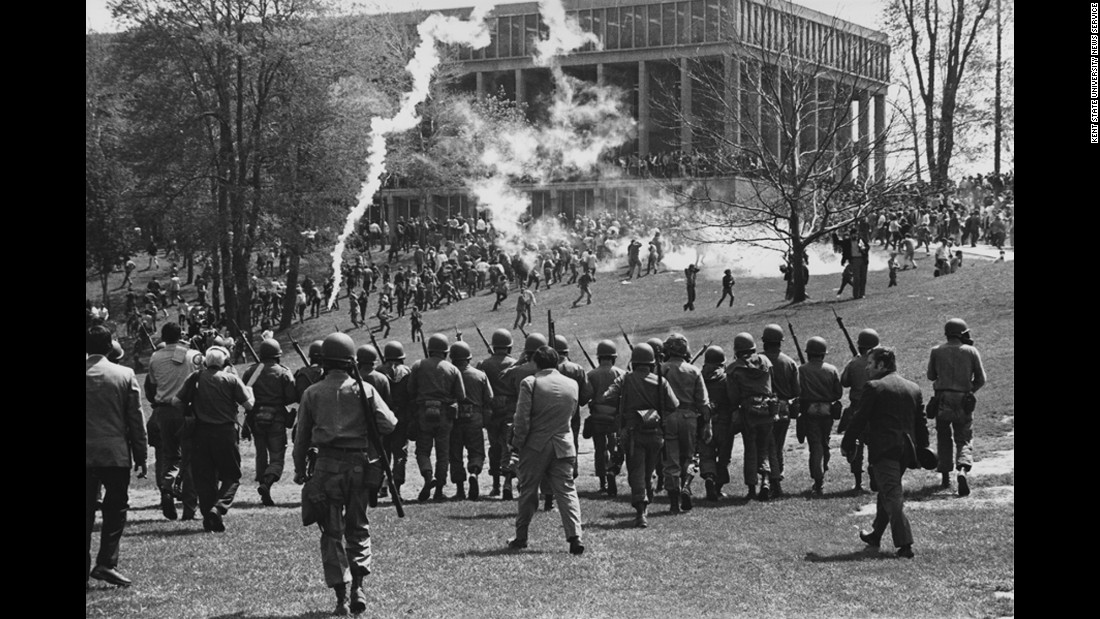 A picture of the famous Kent State Shooting from CNN.com

Another problem that occurred in the 1960s was the tension of college students toward the military. College students weren’t fans of the Vietnam War, so they wanted to protest the military in any way they could. In the late ’60s, the anger turned toward the Reserve Officer Training Corps (ROTC) students on campus. Reported on by The Post, most of the action was debate of whether or not ROTC students should stay on campus or be separate. That changed on  Apr. 22, 1970, when a sit in happened. The incident had nine students arrested in a ROTC classroom. The students got more riled up on May. 4, 1970.At Kent State, four students were shot and killed in a protest of the Vietnam War. Ohio University started setting dumpsters on fire and pulling fire alarms at night. Ohio University decided to implement a curfew to stop people from being out, but nobody followed it. On May 14th, Ohio University called in the National Guard and students were sent home for the semester early.

A $5 bill image from Wikipedia. The thief stole a $5 bill during the robbery.

On Jan. 30, 2013. Ohio University had to deal with an armed robbery. It seemed like nothing major was going to come from it, as only $5 was stolen. The robbery happened in the morning and people close to the situation were expecting the perpetrator to be caught and arrested by the afternoon. But that did not happen. President McDavis decided to close afternoon classes and activities in the university. While the event was going on, staff was put on high alert at residence halls and other significant buildings in order to both report suspicious activity and give advice to the students. A large group of students seemed to ignore the advice faculty provided and instead decided to give the bars a bit more afternoon business than expected. And so, the day known across social media as #FugitiveFest was born.

An image of Perkins Hall from the Ohio University website.

There are many other ways in which Ohio University could be forced to take a day off. Most of the problems in the past were serious events that aren’t really worth a day off. But the good news is individual professors could cancel their classes at any time. Having a day where everyone is off is a blast, but bragging to friends that a class got cancelled can be equally as enjoyable.  Don’t expect too many days off to happen. Instead, enjoy time at the university and be pleasantly surprised when something comes up.